For many Haitians, MINUSTAH has been closer to a foreign occupation force than a UN peacekeeping mission

Five months after the ouster of Haiti's democratically-elected government, the United Nations Stabilization Mission in Haiti (MINUSTAH) began its work on June 1, 2004 with the mandate to provide a stable and secure environment, support the political process and good governance, and improve respect for human rights. Since then, the approximately 7,500 troops, 1,700 police and over 1,000 civilian personnel, led by Brazil and Canada, have failed to fulfill their mandate. Instead MINUSTAH has become complicit in the oppression of Haiti's poor majority by the Transitional Government and Haiti's elite.

For many Haitians, especially those living in the poorest neighbourhoods in the capital Port au Prince, MINUSTAH has been closer to a foreign occupation force than a United Nations peacekeeping mission. The few journalists that have reported from these areas describe bustling streets that are quickly deserted as terrified residents hide from passing UN tanks. Peacekeepers and members of the Haitian National Police (HNP) maintain roadblocks and checkpoints around Cité Soleil, the poorest part of the capital, transforming the rebellious neighbourhood of over 250,000 people into a virtual prison. Civilians are regularly killed or injured during the course of heavy-handed joint UN-HNP operations. MINUSTAH officials have come to speak of "collateral damage" sounding more like US generals than UN officials.

These disturbing snapshots are consistently confirmed in several independent reports.[1] The most comprehensive evaluation of MINUSTAH comes from the Harvard Law Student Advocates for Human Rights and the Centro de Justiça Global (Brazil) referred to as the "Harvard Report." Published in March 2005, its conclusion is worth quoting at length:

"In the eight months since the UN peacekeeping troops disembarked in Haiti...they have failed to uphold either the letter or the spirit of their mandate...Despite one of the strongest human rights mandates in the history of UN peacekeeping operations, MINUSTAH has not effectively investigated or reported human rights abuses; nor has it protected human rights advocates. Charged to train and reform the Haitian National Police, MINUSTAH instead has provided unquestioning support to police operations that have resulted in warrantless arrests and detentions, unintended civilian casualties and deliberate extrajudicial killings. Rather than heeding its directive to protect civilians from imminent violence, MINUSTAH has instead inflicted stray bullets on them...MINUSTAH's disarmament work thus far has transpired only in conference rooms. In consequence, Haiti is ruled by guns and terror, not law. "[2]

Nearly a year later, MINUSTAH has made little to no progress in key areas of its mandate such as disarmament and preventing human rights abuses.[3] The primary reason for MINUSTAH's failure is political. MINUSTAH has been asked by the UN member states, led by the US, France and Canada, the same countries that helped oust the prior Haitian government, to assist Haiti's corrupt and oppressive interim government. When combined with MINUSTAH's own narrow interpretation of its mandate, the result has been uncritical assistance to the interim government and the Haitian National Police (HNP).

Haiti is divided along class lines between a French-speaking mulatto economic elite (and its army and paramilitary allies) and the vast majority of black, Creole-speaking, poor Haitians. The transition to democracy in the late 1980s began a break with Haiti's history of elite rule as the power of the poor majority grew through grassroots organizing and the ballot box. Beginning in 1991, the poor majority won a series of historic political gains, the most visible being the electoral victories of the Lavalas movement and its most popular leader, Jean-Bertrand Aristide.

Haiti's elite, often with crucial international support from the US, France, and more recently Canada, have fought ever since for their return to power resorting to military coups and violent oppression (over 3,000 killed between 1991-1994 following the first anti-Aristide coup), the imposition of neoliberal policies through structural adjustment, investment strikes and election boycotts among other tactics.

The circumstances surrounding the ouster of the second Aristide-led government and the installment of the interim government in early 2004, including the crucial role played by the Canadian government and military, have been well documented and are widely available including in an earlier issue of Peace Magazine.[5]

Contrary to official narratives, the creation of the interim government is thus the latest act in this chapter of Haiti's history characterized by the determination of Haiti's elite to never accept a government chosen by the poor majority. Under the interim government, thousands of Lavalas members and supporters have been jailed, beaten, forced into hiding or killed by the HNP, gangs financed by the elite and the former Armed Forces of Haiti -- a force which was disbanded in 1995 in response to the brutality of the previous military government.

Rather than cooperating with MINUSTAH to disarm the former army, the interim rulers have implicitly acknowledged the army's right to exist by agreeing to pay its members US$30 million in "back pay" even though they had been demobilized more than a decade earlier.

The elite have easy access to the governments' highest officials, often exercising unofficial control over key offices through bribery and political connections. Early on in his term, the now-outgoing Prime Minister, Gerard Latortue, made clear his government's position when he called the former army and paramilitary rebels who ousted Aristide "freedom fighters," while vowing to eliminate armed Lavalas groups.

Given this situation, MINUSTAH's failure to fulfill its mandate is unsurprising. MINUSTAH cannot fulfill its mandate at the same time that it is uncritically assisting a government and police force that have at best lacked the political will to work towards the goals contained therein, and at worst have themselves acted in ways that increase the very conditions that MINUSTAH is supposed to remedy. Although MINUSTAH's mandate calls for it to assist the interim government, this assistance does not have to come in the form of uncritical support with MINUSTAH playing a "secondary and auxiliary role" vis-à-vis Haiti's government. On the contrary, "MINUSTAH's mandate provides ample ground for a robust approach to security, disarmament and human rights... [It] requires a serious and active commitment to furthering peace in Haiti" including a "proactive posture" in the face of an uncooperative government. UN peacekeeping missions with similar or even weaker mandates in difficult countries such as post-civil war Liberia and Sierra Leone were able to carry out effective disarmament, police reform and improve respect for human rights. [6]

The Harvard Report argues that MINUSTAH's narrow interpretation of its mandate is due to a lack of political will on the part of MINUSTAH officials to take the necessary steps to fulfill its mandate. Indeed, MINUSTAH has come under intense pressure from the international community and Haiti's elite, to narrowly focus its energies on blindly assisting the HNP during its violent crackdowns on neighbourhoods opposed to the interim government. Former MINUSTAH military commander, Brazilian General Augusto Heleno Ribeiro, speaking before a Brazilian congressional commission and specifically citing the US, Canadian and French governments stated that "We are under extreme pressure from the international community to use violence...I command a peacekeeping force, not an occupation force ... we are not there to carry out violence, this will not happen for as long as I'm in charge of the force." He later resigned on September 1, 2005 but not before MINUSTAH carried out several large military operations in Port au Prince that have been widely condemned for killing and injuring a large number of unarmed civilians.

Does this mean that the international community should get out of Haiti as many Haiti solidarity activists in Canada, the US, Brazil and elsewhere have called for? Given their role thus far, the French, US, and Canadian governments should be pressured by their citizens to get out of Haiti. But as for a MINUSTAH withdrawal, there is a real risk that with UN troops gone, Haiti's former army will fill the void.

UN role should be Disarmament, Demobilization and Reintegration

Despite MINUSTAH's failures, it must be acknowledged that the presence of UN peacekeepers has, albeit far from adequately, kept the former army and other armed groups from carrying out oppression on an even greater scale than what has taken place to date. On several occasions MINUSTAH has clashed with groups of former soldiers and in some areas outside the capital their control has been reduced. Further, the solution to the threat posed by the former army and all armed groups is, in policy speak, effective disarmament, demobilization and reintegration (DDR). Successful DDR in Haiti requires a human security approach offering viable alternative livelihoods in return for turning in weapons. Right now, no Haitian government, even if willing, has the capacity to carry out disarmament on its own. Thus Haiti finds itself, to paraphrase well-known Haitian author Robert Fatton Jr., in the following dilemma: Haiti needs international assistance but this assistance has so far been ineffective and misguided at best and outright antagonistic to Haiti's poor majority at worst.[7]

Is this situation likely to change in the short term? Numerous independent reports have been published by both foreign and Haitian organizations, calling for a series of MINUSTAH reforms.[8] These include but are not limited to: MINUSTAH taking a robust stance towards the HNP, even granting it direct authority over the police force; increased UN action and authority in key areas such as human rights and DDR and the resources needed to carry this out in the face of an uncooperative government; and a shift from a narrow militaristic view of security to a human security approach that recognizes poverty and marginalization as key sources of insecurity for the majority of Haitians. To begin to repair MINUSTAH's relations with the people it is supposed to protect, the UN should admit MINUSTAH's failure and hold accountable UN personnel from the top down, including those directly responsible for human rights abuses.

One reason for cautious optimism may be the recent election of Réné Preval in February, a former president and one of Lavalas' most important leaders, as the country's next president. An effective Preval government increases the likelihood of MINUSTAH beginning to fulfill its mandate in at least two key ways. First, it raises the possibility of a Haitian government that is actually committed to the goals of MINUSTAH's mandate and willing to cooperate with MINUSTAH to fulfill them. Second, an effective Preval government is likely to lead to a significant reduction of political violence given its legitimacy in the eyes of Haiti's poor majority, including pro-Lavalas armed groups. With a Lavalas leader as president, there is also a greater chance that work towards an inclusive national reconciliation agreement, a crucial prerequisite for an end to the conflict in Haiti, may begin if Haiti's elite are willing to participate.

All of the above possibilities are premised on an effective Preval government. It remains to be seen whether Preval's win is accepted by Haiti's elite (not only formally but in actuality) and even if accepted, whether Preval can exercise effective control over a police force, bureaucracy and possibly a parliament that are largely made up of officials tied to the elite. However, reform of MINUSTAH does not have to, and must not, wait for changes on the part of any future Haitian government if its mandate is to be fulfilled. Without reform, the only justification for MINUSTAH is that things would be even worse without it. This is a negative and, in the long-run, unsustainable defense for a UN peacekeeping mission that speaks to MINUSTAH's ongoing failure to meet its mandate.

Alex Diceanu recently completed an internship at Project Ploughshares. He holds an MA in Globalization Studies at the Institute on Globalization and the Human Condition, McMaster University. 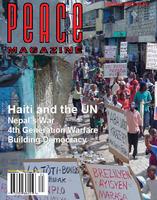 Search for other articles by Alex Diceanu here