Northern Ireland Deals with its Past - Slowly

Fragile peace can only be secure through reconciliation

For hundreds of years Northern Ireland has known periods of peace interrupted by outbursts of violence. Some say if the pain and grief that this has caused is not dealt with properly, violence might erupt again. The key is reconciliation.

When walking in the shopping streets of Belfast, north of Donegall Square, it is hard to believe this is a divided community. Here in the bustling commercial centre of Belfast you can't tell Protestant from Catholic and there doesn't seem to be any tension. Leave, however, the centre of the city to go to areas such as Shankill or Falls Road, and you'll find very homogenous neighbourhoods.

Although sectarian violence has increasingly become rare since the ceasefires of 1994 and the 1998 Good Friday Agreement, segregation in Northern Ireland is higher it was ten years ago. In recent elections, the votes went to the more extreme parties, the Catholic Sinn Féin and the Protestant Democratic Unionist Party (DUP), a telling sign of the persistent segregation in Northern Ireland. And areas are even easier to classify as "Protestant" or "Catholic" as the percentage of single-community areas rises.

However, a movement of community organizations has emerged in an effort to turn this trend around. With the latest statement from the Irish Republican Army (IRA), declaring an end to their armed campaign, the circumstances have improved for many community organizations who work to bring the two split communities, the Protestants and Catholics, back together.

"In the history of Northern Ireland there's a cycle. For the last 500 years, violence has erupted after quiet times. We need to finish it now," says Anne Anderson Porter, the director of operations of Co-operation Ireland, a charity devoted to peace in Northern Ireland by bringing people from different religions together.

Geraldine Smyth from the Irish School of Ecumenics agrees with her. "When the root causes aren't dealt with, it can happen again," she says referring to sectarian violence.

"This sectarian way of living is radically unhealthy," says Ben Walker, research coordinator for the Centre for Contemporary Christianity in Ireland. "It fixes arrogance, an exaggerated sense of self-importance and prejudices against all other communities," adds Walker.

Northern Ireland, which in recent years has seen an influx of immigrants, now has to deal with ethnic minorities as well as with the classical religious tension. An increased level of racism is noticeable says Walker.

What is then the key to reconciliation? There is not a simple answer. No handbook to reconciliation exists. Certain things can be learned from other regions that had to deal with a violent past (for example, Rwanda in the aftermath of the 1994 genocide) but every divided community is unique. "There are no miracle solutions. There isn't one technique that can deliver reconciliation," says David Stevens, leader of the Corrymeela Community.

The basis for reconciliation is creating dialogue. "A lot of Protestants don't even know any Catholics, and vice versa", says Walker. Denis Anderson, lecturer at the Irish School of Ecumenics acknowledges creating dialogue is the first step in the difficult process of reconciliation. "One of the problems in Northern Ireland is that people have a lot of misconceptions or wrong ideas about each other," says Anderson.

Many peace and reconciliation organizations try to introduce Catholics and Protestants to each other by organizing activity weekends. Co-operation Ireland is one of these organizations, which organizes programs for young people. Participants of the program usually come in contact through a network of volunteers called YouthNet. "We don't recruit people," says Bronahj Cappa, youth worker at Co-operation Ireland. "If you go to youngsters and promise them a certificate or something, they will laugh in your face. They have to come to us. The reason they do, is always to make new friends."

One of the methods of reconciliation is by pressing religious figures. In Northern Ireland, the church is still highly influential in everyday life. "In my street alone there are nine churches. Especially the working class is much more likely to listen to a local community leader like a priest than to a politician," says Ben Walker of The Centre for Contemporary Christianity in Ireland, which challenges church leaders to engage their audience in contacting people "from the other side."

While the conflict in Northern Ireland is a political one -- the unionists/loyalists want Northern Ireland to remain a part of the United Kingdom and the nationalists/republicans want it to be part of a united Ireland -- this reflects a religious division which was itself the product of British colonial rule.

The unionists, mostly descendants of the English and Scottish who moved to the region during the 16th and 17th centuries, are mostly Protestant. The nationalists, or republicans, are mostly Roman Catholic, as are most citizens of the Republic of Ireland.

Ireland knew many violent revolts before they finally managed to gain nationhood after the War of Independence of 1919-1921. It took until 1949 for Ireland to become a republic and leave the Commonwealth. However, six of nine counties in the northern province of Ulster, the most wealthy at the time, were to remain part of the United Kingdom as Northern Ireland.

From the end of the sixties, paramilitary groups from both sides increased their campaigns during a period of intense sectarian conflict, by the British government euphemistically called The Troubles. Over 3,500 people died, and at least 40,000 people got injured. "Everybody knows somebody who has suffered," says Denis Anderson, lecturer at the Irish School of Ecumenics. His colleague at the School, Geraldine Smyth, for example is one of them. "One of my relatives has been killed and another who was wounded still walks around with three bullets," says Smyth.

Therefore it is said that the entire Northern Irish community of 1.5 million is scarred, not just the ones who suffered personally. In their book Northern Ireland after the Good Friday Agreement: Victims, Grievance and Blame, Mike Morrissey and Marie Smyth wrote : "Many people who have lived through Northern Ireland's Troubles would describe themselves as having been harmed by the events of the last 30 years. There are many who nurse a festering anger at various politicians or public institutions. Many others are fearful of a return to violence and find it hard to trust the possibility of a peaceful future."

As a means to come to a community-wide reconciliation, there have been calls for a "South African style" reconciliation commission. Until 1994 South Africa was ruled by a white minority which considered itself superior and installed a regime of apartheid. A "Truth and Reconciliation Commission" was set up in 1996 under chairmanship of archbishop Desmond Tutu. After two years the Commission deemed apartheid a crime against humanity and condemned the South African government, but also held the liberation movement of the ANC accountable for violations of human rights.

Of course, there are differences between the situation in Northern Ireland now and the situation in South Africa in 1996. "The South Africa truth commission was post-conflict. I would be very careful to use the phrase post-conflict here," says Pauline Kersten, Community Projects Officer at the Community Foundation, a peace organization that doesn't "do reconciliation," but tries to create the conditions in which reconciliation is possible.

The South Africa Truth and Reconciliation Commission was set up after there was the regime change in 1994, when the white minority negotiated itself out of power. In Northern Ireland there has been no regime change as such. The Northern Ireland parliament at Stormont has been suspended and the region is being ruled from London. "A lot of nationalists are sceptical against such a commission run by the British government, because it is a party. They don't trust the British government will give openness," says Pauline Kersten.

From the loyalist side, there also is a lack of trust. "I don't think you'd get the truth," says Robin Newton, city councillor for the Democratic Unionist Party in Belfast. "You would never get the truth from Sinn Féin. In the end, nobody will be happy."

Despite sceptical sounds about the form, most community groups do agree that there should be a forum for people to grief. So does the Corrymeela Community, founded in 1965. Corrymeela is a Christian organization committed to healing the social, religious and political divisions in Northern Ireland. "The most important aspect for reconciliation is to have a safe space and a place for telling stories," says David Stevens, its leader.

At government level this is also acknowledged. This February, the secretary of state for Northern Ireland at the time, Paul Murphy, told the House of Commons the government is considering a victims' commissioner.

A challenge would be to give equal opportunity to all victims. There have been losses on both sides of the sectarian divide, Catholic and Protestants, but it's difficult for some to acknowledge that people "on the other side" also suffered. According to David Stevens of Corrymeela, there is a "our victims are better than your victims" mentality among some victims groups. "But nobody has the monopoly of pain," says Geraldine Smyth.

Smyth stressed that sectarianism doesn't necessarily relate to violence. "You don't have to be aggressive to be sectarian. Everybody does it, but always points to somebody else. I think we are all sectarian, me too," says Smyth. It takes very little for sectarianism to be kept in place, she explains. "By ignoring it, by never meeting others from the other community, by making sectarian jokes."

Therefore, you can have as much organizations as you want, but the people are the ones that have to change. A positive indicator of change for Northern Ireland is the rise to 14 percent in mixed marriages. With the absence of violence, people can afford to be pragmatic. If the quality of a mixed school is better than of a sectarian school, increasingly more parents decide to be opportunistic and choose the mixed school. Perhaps what Northern Ireland needs isn't altruism or idealism, but simple pragmatism to filter out sectarianism.

Mr.Teffer is a European journalist.

Our cover image, the Derry Peace Mural, is part of a city-wide outdoor history project by the Bogside Artists www.bogsideartists.com. Other murals in the series show scenes from the Civil Rights Movement and Bloody Sunday, culminating in this hopeful, and universal, image of peace.


The dove is entwined with an oak leaf, two symbols of the city of Derry (its patron saint, St. Columba, is represented by a dove, while the city's Gaelic name, "doire," means "oak grove"). Photograph by Martin Melagh (c) CAIN cain.ulst.ac.uk/photographs 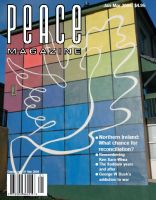 Search for other articles by Peter Teffer here