Humankind lost one of the greatest peacemakers of our day in August 2005 when Sir Joseph Rotblat died at age 96. He was the last surviving signatory of the Russell-Einstein Manifesto (see pages 23-24) and spent almost all of his long life informing people about the dangers of nuclear weapons. He had quit his job on the Manhattan Project after learning that its real purpose would be to wage war against the Soviet Union. In 1995, he shared the Nobel Peace Prize with Pugwash, the organization that he helped found and which he served 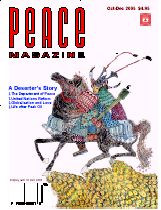