The three Council of Europe countries which continue to jail conscientious objectors (COs) have all signalled their intention to continue doing so, according to recent reports. In Turkey, gay anti-militarist CO Mehmet Tarhan was forcibly returned to his military unit after being released from prison. Other anti-militarists who attended his trial were stopped by police and in some cases arrested and held, though none remain in jail.

In Greece, where men in their thirties and forties are frequently arrested for refusing to perform reserve duty, Nikos Baltoukis was given a 15 month sentence for refusing one week of military service. Soon afterward, Georgios Koutsomanolakis was sentenced to two years' imprisonment, based on a refusal which dated back to 1979.

Finland's alternative service is more than twice as long as military service and refusers are given 197-day prison terms. In June, the government disappointed critics by deciding not to introduce any promised changes to military law. Finland, like Greece, is a European Union member; the European Parliament has pressured both countries to change their laws.

Balkans Not for EU?

The final declaration of the EU summit in Brussels on 16-17 June did not mention accession plans of Bulgaria, Romania, Croatia, or Turkey. Without being told, people in those countries realize that their admission to the group will not happen soon -- if at all -- because of the crisis caused by the lack of support shown to the proposed constitution. Serbian Prime Minister Kostunica had hoped to ask for admission for his country, but the postponement of Croatia's entry means that Serbia's chances are even lower.

Carla Del Ponte, the Hague-based war crime tribunal's chief prosecutor, said that Croatia had received a wake-up call from the message that Zagreb must cooperate with the tribunal if they want into the EU. This was the main leverage used to get them to coooperate and hand over certain people for trial. By the same token, the absence of a clear prospect of admission is likely to weaken Brussels's ability to influence Croatia or any other country in the region.

There have been recent media reports, denied by the Serbian government, that the indicted Serbian General, Ratko Mladic, is on Serbian territory and negotiating his surrender to the tribunal with security for his family.

Canada will raise its number of troops in Afghanistan by about 1,250 by February, closing its Kabul base and transferring troops and equipment to Kandahar in southern Afghanistan. A reconstruction team of 250 will be sent there in August, to remain for about 18 months.

A newly updated report by Congressional Research Service (CRS) questions the effectiveness of the fledgling ballistic missile system being promoted by the White House. It points out that "there is no unambiguous, empirical evidence to support the contention that kinetic kill for ICBM defence will work... and no empirical evidence of [a single] air defence system with a probability of intercept much greater than about 30 percent." See: www.fas.org/sgp/crs/weapons/RL31111.pdf

A proposed 1,150-mile-long link between Canada and Alaska could end up providing support to the US missile defence system. It would connect British Columbia to a site near Eielson AFB, Alaska. Both countries insist that it is geared toward transporting natural resources. However, it could also bring materials to Ft. Greeley, Alaska, where ground-based interceptors for the US missile system are based. The link could allow the US to develop a port for ships carrying its sea-based missile defence interceptors, though Canada has stated that it will not cooperate with the United States on its missile defence system.

The New York Times reported on May 18, 2005 that a new national space policy directive is being developed by senior administration officials, to replace an older one that leaned away from placing weapons in space. Many observers see the new directive as more amenable to weaponizing space. An Air Force doctrine proposes to fund dual-use systems. Russia has voiced concerns about the direction of the new US policy. A spokesperson of Russia's Foreign Ministry stated the intention of proposing a draft resolution of the UN General Assembly on measures to ensure transparency and confidence building in space activity. So far, the Russian government is seeking diplomatic solutions instead of other measures. 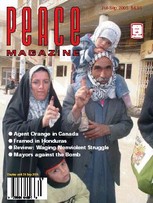