There has been a lot of news since our last issue was published. George W. Bush was re-elected (probably -- since there are questions even about this election's validity). Congress deleted the US budget for new nuclear weapons. The Canadian government began a new review of its foreign policy -- a move that prompted our editors to survey the especially promising proposals of a number of peace and human rights organizations, which we have presented in this issue.

Especially heartening is the nonviolent protest movement that has gone on in the streets of Ukraine in December.(See Newsworthy.) Every time a group pulls off a nonviolent defence of democracy (as the Eastern Europeans have been doing with increasing frequency), the skeptics lose credibility for willfully ignoring the possibility of solving such issues without bloodshed.

From eye-witness accounts, these protesters are motivated by extreme idealism. At the same time, there also are other less apparent considerations. For example, the departing dictator of Ukraine, Leonid Kuchma, had sent 1,600 troops to Iraq as part of Bush's "coalition," clearly with the encouragement of Russia's Putin. The opposition candidate, Yushchenko, had promised to pull those troops out if elected -- a pledge that annoyed Putin.

Moreover, Yushchenko's positive orientation toward Europe was revealed in his support of an oil pipeline through Ukraine to Poland -- a line that had already been built, so as to reduce oil tanker traffic in the dangerously crowded Bosporus. The Russian government, not liking the independence that this financial deal afforded Ukraine, had insisted that the oil must flow in a reverse direction, toward Russia instead of toward Europe. This was promoted, not for practical economic reasons, but evidently to maintain Russia's influence over Ukraine. The long-term outcome remains to be seen, but the Kievans' method of protest is awe-inspiring -- one more validation of the work of Gene Sharp and Robert Helvey.

As Jesse Jackson commented, "In the Ukraine, citizens are in the streets protesting what they charge is a fixed election.... But in the United States, massive and systemic voter irregularities go unreported and unnoticed. Ohio is this election year's Florida. The vote in Ohio decided the presidential race, but it was marred by intolerable, and often partisan, irregularities and discrepancies. US citizens have as much reason as those in Kiev to be concerned that the fix was in....Democracy should not be for export only." Right you are, Reverend Jackson! 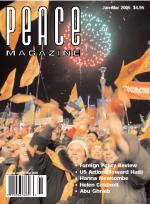