During this remarkably fateful US presidential campaign, every shred of civility has seemingly vanished from public discourse. Leaving aside the Iraq war's bloody consequences, we ask: what could have been done for the world with the $500 billion that the war has cost? Answer: the number of children dying of hunger could be halved within two years, plus, potable water could be provided in the places lacking it, plus, primary education could be provided to all those children who now lack it; plus an effective HIV/AIDS program could be funded for the whole world. Imagine what this would do to terrorism! A new generation of youth around the world would be grateful to the United States instead of hating it. This insight fits our talk with Susan Brown about development as an economical, practical means of conflict prevention.

In this issue we devote considerable space to Iraq -- first by reviewing its history since Mesopotamian antiquity; second, by discussing the revelation that the US-led coalition intentionally wrecked Iraqi water purification facilities during the previous Gulf War to create ill health among the populace. Urgently, health care workers and military personnel need a new, stiff set of guidelines to prevent such unethical acts in the future. Third, we offer Andres Kahar's witty but accurate categorization of the political views of the pundits about the war against Iraq.

But at this moment, the world's most serious humanitarian crisis is located in Darfur, a province of Sudan where the government-funded Arab "janjaweed" marauders have killed some 50,000 people so far. US officials are now applying the term "genocide" to this situation -- a fitting term that nevertheless requires an international response to protect those imminently in danger. It is uncertain what kind of intervention will be undertaken, though it seems likely that the African Union will be involved. See Ron Shirtliff's review of the roots of this crisis. 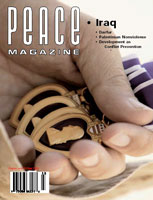