Peace, Conflict, and Violence: Peace Psychology for the 21st Century

This reader inspired me like a breath of fresh air on a smog-filled day.

While the headlines raged on prisoner abuse in Abu Ghraib, and while houses were being razed in Gaza, I found refuge in a book that offers a clear and profound message: peace is possible.

Peace is possible because there are underlying reasons for the conflict and violence in the world today. Psychologists can analyze them. And better than that, psychologists can point the way forward to solutions, based on their understanding of human psychology.

We, the readers, are challenged to roll up our sleeves and dig in to help transform the world:

Education for peace ... is not an armchair endeavor, but a process of education and mobilizing people for peace (and) is of central importance in activism. Peace education is schools is valuable and ... education for peace also includes informal education, including learning by doing and social action. Psychologists stand to contribute significantly to this multi-level work ... ( p. 359, "Psychologists Making Difference in the Public Arena: Building Cultures of Peace")

And plenty of examples of how to bring about this transformation are offered in this thirty-chapter book.

The book is organized in four sections. 'Direct Violence' examines a range of violent situations from the interpersonal (intimate violence and anti-gay/lesbian violence) to genocide and mass killing. I was reading this during the ten year memorial of the Rwandan Genocide, and so the chapter on the roots and prevention of genocide was of particular interest. Ervin Staub outlines the factors contributing to group violence, and how those build up over time. He calls for the UN to take action before genocide occurs, and describes many methods, including sanctions and boycotts, to apply pressure before the genocide has occurred. Staub also refers to the role of third-party nonviolent presence, such as that provided by Peace Brigades International. Finally, Staub addresses healing processes and prescribes changes in our culture, calling on us to raise humane children whose caring extends to people outside their own group.

It is encouraging to see structural violence addressed directly through several thoughtful perspectives on social injustice. The authors consider both social injustice within a national context (US) and larger currents of globalism. The impact of social injustice on women and children is clearly outlined, as is the need for women's involvement in decision-making bodies.

'Women make up more than half the population, perform 2/3 of the world's work ... .However women earn only 10% of the world's income and own 1% of the world's property ... . If we are serious about achieving peace then we must be committed to women's empowerment'.

I was particularly impressed by the chapter "The War Close to Home: Children and Violence in the United States," not only because of its descriptions of the impact of this violence - fear, loss of safety, psychic numbing, futurelessness, and aggressive attitudes and behavior - but because of its proposals for intervention, prevention, and peacebuilding. We need not sit idly by while this continues in the next generation; we know what to do, and what's more, intervention programs (e.g. teaching cognitive restructuring of ideas about aggression, and offering role play practice) are very cost effective in the long term.

So exactly what is it that keeps violence dominant? A chapter on militarism notes that "Wars cannot be conducted unless militarism is nurtured long before wars begin" and examines money, masculinity, and the search for the mystical as factors driving militaristic sentiments.

The second half of the book focuses on this goal, covering peacemaking which is 'a positive approach: building mechanisms that lead people to cooperate in positive, peaceful interaction' and on peacebuilding

The chapter "Crafting Peace" explains the psychology of the Transcend approach and outlines its dialogue-based method for conflict transformation. This method peels back the layers of rigidity of parties in a conflict through multi-step processes which deepen understanding and transcend their initial assumptions.

The final section is in many ways the most satisfying, with each of the chapters offering a perspective on peacebuilding, as the long-term process of restructuring society's institutions to reduce oppression and create equality.

Two chapters on Gandhi explore alternative models of power. Gandhi inspired millions with his model of political power based on fearlessness and practical wisdom spoken through nonviolent means. Examples illustrate the practical application of this principled strategic approach.

This book establishes a framework for understanding and responding effectively to the major challenges of a world that is drowning in violent conflict. It offers many practical examples of programs that are effective: those that start with young people and help to develop the cognitive understanding and the skills required to go beyond the rigid thinking of their elders. Others show how to respond to post-conflict trauma and provide assistance in rebuilding war-torn communities. The forty-four contributors cover this broad range of topics very competently. Combining all of these works together creates a heartening antidote to the myth that war is inevitable and just 'human nature.' This book shows how to reach for the best possibilities of humanity in order to prevent violence, intervene against violence, and heal its aftermath.

It is highly recommended. 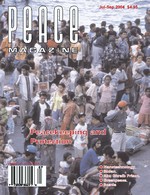