One evening in mid-1984, before the schoolchildren were leaving for home, there was a loud explosion on the hill near the village. As a teacher, I shouted "What was that?," and one of my students replied, "That is just a landmine explosion, teacher."

Throughout the village people were looking up the hill, talking about what had happened. They knew that this was just a landmine incident, but they speculated that, since there was no information about Burmese Army activity at the time, it may not have been a Burmese soldier who stepped on it. Some people said that three men had gone hunting on the hill that morning - two of them Karen guerrillas and the other one a customs officer of Karen National Union, the biggest ethnic armed rebel group in Burma, which had been established in 1949. Some people said that perhaps a wild animal had stepped on a landmine instead of those three men because one of them is a landmine expert who knows exactly where the landmines are planted. Some villagers prayed for these three men to escape from danger.

Two hours later a customs officer arrived in the village and asked people for help carrying back the wounded soldier from the hill. The victim arrived back in the village at around 9 pm, unconscious and looking very pale. He had lost his left leg below the knee. The expert soldier had been leading the team back from hunting when the mine exploded.

It was my first time to see a landmine victim. Even though it was nighttime, everyone gathered at the guerrilla camp for more information. Then villagers carried the victim in a hammock to the hospital located in a small border city in Thailand. The journey required at least five hours, for they had to climb a steep 3,000 foot-high rocky mountain. All the villagers stood and prayed quietly in the dark at the bottom of hill for the victim while a number of people, using a torch on top of a bamboo stick, carried the wounded soldier uphill. The prayers did not succeed, for the victim died of his wounds when they reached the middle of the mountain.

I had heard about the Karen guerrillas and their use of landmines since I had been in primary school in 1960. Several times since then, the Burma Army (Tatmadaw) had launched other major operations against Karen rebel strongholds on the Thai-Burma border at such places as Wanka, Phaloo and Mawpokay. Some traders were smuggling from the cities to the border at the time, and I was curious to know the border situation, so I approached them for information. They said there were lots of Burma Army casualties from landmines planted by Karen guerrillas. They said they had not actually seen the landmines, but knew them to be really dangerous and hard to defuse or avoid. They are made of Lepo-vitan bottles, inserted into bamboo and laid under the soil without any metal devices. The battery for the detonator is wrapped up with layers of plastic, put in bamboo, and laid together with the mine. The two pieces of wire from the detonator and the positive and negative wires from battery are placed together on both sides of a thin, flat piece of bamboo only a couple millimeters apart and laid beside the mine to disguise the trigger. The guerrillas named those landmines Yinmanar - "even flies cannot stop by." One of them can last a maximum of two years, but once you plant it, it is ready for action at once and does not know whether you're an enemy or a friend.

The guerrillas plant landmines as their defence against Burmese army attacks, but even experienced mine planters can maim themselves in planting or defusing their mines. Some were blinded and others disabled. Since the guerrillas do not have specific maps of the landmines, their own comrades can step on them after the planters have left. The Burmese Army has suffered a lot of casualties from landmines and malaria in every military operations against Karen guerillas. Nobody knows the details because no report has been disclosed publicly from either side; however, it is undeniable. Even though officials from the ruling regime and the ethnic armed struggle groups do not want to acknowledge their casualties, many landmine victims can be seen throughout the whole country - even in refugee camps along the border. According to a Burmese army defector, the commanders always order their soldiers to leave the deserted landmines behind. "They always said to leave them because they are not for us - just for ethnic people. We have to go back to our barracks when the time comes."

A retired Burmese surgeon, now residing in United States, said that during his three-year service as head of a provincial hospital in Burma in the 1970s, there were at least 12,000 landmine victims sent back from several frontlines.

When the Tatmadaw launched a military operation against ethnic rebels, the commanders collected inmates and political prisoners from various jails and used them as human mine-sweepers. The soldiers forced them to go ahead of the troops along marching routes where they suspected mine fields lay. Those prisoners were named Wunsaung Tat Thar, "the carrier soldiers" and were given identity numbers like real soldiers. In fact they are just military porters. According to a Burmese army defector, in year 2000 he saw about 150 prisoner porters brought from the notorious Insein jail to the front line, but at the end of the military operation there were only 70 left. About 80 of them were killed and maimed by landmines. City people and villagers along the marching routes have also been forcibly recruited by soldiers from houses, farming fields, movie theaters, tea houses, jetties, bus terminals, and markets for use as military porters. In 2001, during an exclusive interview with some escaped SPDC porters at Wehgyi, a village near the Thai-Burma border, the porters said they had to carry rations such as rice bags, but mainly mortar shells for soldiers, to the frontlines. Despite their fatigue, soldiers sometimes asked them to use long bamboo sticks to search for landmines. Some porters have been killed, others blinded by explosions. Such things happen on a daily basis at the front.

"When I see the landmine victims who lost their limbs working or in the jungle to support their families, I feel hurt in my heart. When I hear that Burmese ex-soldiers who lost their limbs are selling illegal lottery tickets, begging on the street, or feeling so depressed as to commit suicide, I feel hurt in my heart. Isn't there welfare assistance for them? Isn't there any rehabilitation project for them? They fulfilled their service in the frontline bravely. They fought for their officers as much as they could. It is not fair for this to be their only reward. If there is an aid program for landmine victims from else where I will appreciate that," said a Karen refugee, a landmine victim from a refugee camp on the Thai-Burma border.

Most landmine victims have lost their physical or moral support. A Karen girl who lost both legs from landmine explosion is carrying her physical and psychological burden every day in the Mae Tao clinic in Maesot, Thailand. Two months after her wedding, she stepped on a landmine near a sawmill while looking for bamboo shoots. Her husband sent her to Maesot hospital and then abandoned her. "I have no relatives to take care of me," she said. "My mother has married a new husband, and my sister and brother have gone to the city for jobs." Sometimes she has joyful dreams but when wakes up, she can only cry.

Pressure on the military junta

The so-called State Peace and Development Council's (SPDC) troops and the ethnic armed struggle groups are intensifying the planting of anti-personal landmines. Some Asian countries, including China, India and Pakistan, support the Burmese military regime. Even though the SPDC delegation attended all conferences of the International Campaign to Ban Landmines (ICBL), they continue to hire engineers and technicians from those countries to manufacture modern weapons. Burma is one of the countries in the world still manufacturing landmines.

Thailand's prime minister urges both the SPDC regime and the Karen National Union (the biggest ethnic rebel power in Burma) to reach a ceasefire. The KNU is always offering genuine peace talks with the SPDC. Even though Thailand is one of the State Parties of ICBL, the current Thai government is willing to send Karen refugees back to Burma (the worst landmines field in Asia after Cambodia) in order to ease their country's burden soon after the ceasefire agreement has been signed. If that happens there is no provision for the refugees' safety once they return to their homeland - a place full of invisible enemies. Unless specific mine destruction programs are completely established in Burma there will be many innocent souls taken or victimized over and over. The homeland of the Karen people will be hell. 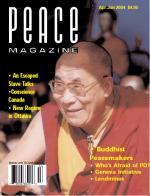 Search for other articles by Ler Wah Lo Bo here