The ouster of Eduard Shevardnadze in Georgia and the victory of Putin's party in the Russian election have brought closure to Gorbachev's liberalizations. Both events resulted from the (probably temporary) triumph of corruption over democratization, disillusioning voters.

Yet there is much to celebrate about the departure of the formerly admired Mr. Shevardnadze, for it represented yet another success story in the lengthening list of nonviolent resistance movements that have unseasted autocrats. George Soros contributed the money and served as matchmaker, so that the opposition movement in Georgia could learn from the recent experience of OTPOR, the opposition group that unhorsed Milosevic.

This raises an important question: Where was Canada when these resistance movements were going on? Its official foreign policy seems to be awkwardly inconsistent.

If you visit the Foreign Ministry in Ottawa you will learn a new acronym -- "R2P"-- shorthand for "Responsibility to Protect," the doctrine Canada is promoting that spells out the conditions under which international law may justify military intervention against a foreign state. Specifically, according to R2P, if a state fails in its responsibility to protect its own citizens (or, worse yet, itelf represses them) then the international community may properly come to their aid, forcibly if need be.

But if that is to be the guiding principle (and not every citizen will endorse it) then at least that "R2P" criterion easily justifies a much less dangerous preliminary step -- for the Canadian government to support opposition groups inside a repressed society that are trying to bring down the dictatorship of their own country by means of nonviolent resistance. Canada could, for example, facilitate conferences for Tibetan and Burmese refugees who seek to free their countries of dictatorships nonviolently.

Yet, strangely, even many Canadians who would join willingly in a coalition to oppose a dictatorship by military means seem shy about facilitating nonviolent resistance among expatriates of that same country. Why so?

Canada's foreign policy ought to give primacy to officially supporting every nonviolent movement for democracy. 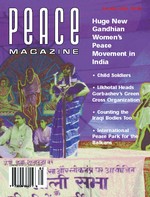