Suppose you were in charge of the campaign to eliminate war from the face of the earth. How would you go about it? Actually, you are in charge of a good part of the job -- for every person among us is responsible for it. There's something for everyone to do.

One place to start is with kids. Penny Sanger's article in this issue is devoted to promoting peace education in schools. She asks why there has been so little follow-through on previous pledges to provide such instruction. Kids enjoy learning to handle conflict on the playground and classroom. One confirmation of this is Allison Martell's piece on the commitment of this generation of youth in peace -- initially by opposing the war in Iraq, but with an ongoing concern.

Then there are many possible interventions to restore peace with justice in such troubled countries as post-civil-war Guatemala. Read Aaron Bates's report on his human rights work with ADIVIMA. And Kirsty Pazek describes similar problems the Chittagong Hill Tracts of Bangladesh, where women are especially suffering from abuse.

Another angle is to prevent the proliferation and deployment of weaponry. Sarah Estabrooks reports on the campaign to prevent the weaponization of space. Lloyd Axworthy recently addressed a parliamentary committee on the same subject -- especially its relation to Canada's debate over participating in the US missile defence scheme -- and his comments have been briefly summarized in this issue.

People feeling particularly concerned about the dangerous policies of the United States will be fascinated by Fred Knelman's report, which gives the background of Bush's main hawks today.

Or you might work on new institutions designed to handle security problems, especially in the Middle East. See René Wadlow's proposal for a new OSCE for the area.

Finally, a few people are making huge contributions through devising alternatives to war in cases where people feel their core values are under attack and cannot be protected by negotiation or compromise. There are ways of fighting wars without violence. See the interview with Gene Sharp, and the article by John Bacher on targeted sanctions. And keep up the good work, friends! We're all in this together. 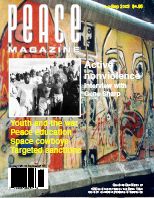