On to Plan B: "Uniting for Peace"

Now that Bush has Attacked Iraq Without a Security Council Resolution

Despite Robert Muller's inspiring sense of joy about the world-wide peace movement, the immediate reality, as we go to press, is a war carried out without authorization from the Security Council.

So what can be done? Is the world powerless to stop this action? No. Even if the Security Council is at a stalemate, another option still exists for action by the United Nations. The General Assembly can invoke a procedure (UN Resolution 377) called "Uniting for Peace," and demand an immediate ceasefire and withdrawal.

Crime Against the Peace

The Center for Constitutional Rights (CCR) and Greenpeace are jointly calling for all members of the United Nations to uphold the UN Charter by holding an emergency session of the General Assembly. Michael Ratner, President of CCR, said that, if passed, the "Uniting for Peace" resolution will put the United States and Britain on notice that a war without Security Council authorization is "utterly illegal and a crime against the peace. "

Although the Security Council has primary responsibility for maintaining international peace and security, this alternative procedure exists when the Council fails to do so. The Uniting for Peace resolution allows the General Assembly to meet and then recommend measures to maintain or restore peace.

If one United Nations Member State requests that a meeting be convened to consider adoption of such a resolution and either seven Members of the Security Council or a majority of the Members of the General Assembly agree, an emergency special session will be called and the General Assembly will come together to discuss the threat to international peace. The challenge at this point is to find the requisite support for convening such a session. The resolution has been invoked ten times in the past 50 years - most frequently on the initiative of the United States. The global peace movement should be discussing the possibility of demanding this action.

When Egypt nationalized the Suez Canal in 1956, Britain, France, and Israel invaded Egypt and began advancing on the Suez Canal. President Eisenhower demanded that the invasion stop. Britain and France vetoed a resolution in the UN Security Council calling for a cease-fire. The United States appealed to the General Assembly, which held an emergency session and passed the resolution. Britain and France withdrew from Egypt within a week.

Resolution 377 provides that, if there is a threat to peace, breach of the peace, or act of aggression and the permanent members of the Security Council do not agree on action, the General Assembly can meet immediately and recommend collective measures to the UNmembers. Countries opposed to the impending war - notably Canada - should state now that they will convene the General Assembly.

Sources: Jeremy Brecher and the web site of CCR, www.ccr-ny.org. 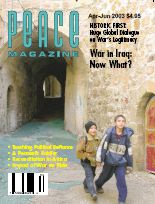