As the Chechens See It

People rarely think globally. Normally they judge on the basis of their own experience. Your own experience is much more solid and convincing than any stories and considerations provided by other persons. Chechens' attitude towards Westerners fits the same pattern. It is based mostly on their own experience of dealing with Westerners. And if they have no experience they rely on commonly-shared views that usually turn out to be pure propaganda.

Few foreigners came to Chechenya before the recent wars. Thus Chechens got an opportunity to meet them only after the first war (December 1994) had been launched.

Westerners were represented by journalists, different humanitarian organizations, and human rights activists. Lots of people were members of the three groups simultaneously.

Naturally, Chechens didn't experience any harm from these people. On the contrary, they received help and compassion. And money also -- because all these Westerners desperately needed guides, translators, cooks, drivers, and house-cleaners. They hired Chechens, and paid them huge salaries (in Chechenya $50 per month is a huge salary) and Chechens were absolutely happy and ready to serve Westerners for years.

Moreover, Westerners delivered humanitarian help and opened small medical assistance offices. Also an "asylum for children who had lost their parents" was established in Grozny by Czech journalist Petra Prokhazkova. It was her idea; she found financing somehow and organized the whole thing. Then she even gave up journalism and started to live and work in her asylum on a regular basis. She told me about the months she spent there. No news, no TV You think only about "how to survive" - about food, fuel and care for the children.

One day she left for Prague to raise funds or bring food to the asylum but the Russians didn't let her back into Russia. They refused to stamp her Russian visa. Not long ago I saw a report about her orphanage on Russian TV There are 50 children now.

Russian journalists were brought to that place by the Russian militia's press bureau. The journalists didn't know anything about Petra and the role of Western people in the asylum's establishment. It was represented as if the Russian militia had organized such a house for children. But a correspondent asked a small girl, "Where would you like to go in your life? What would you like to see?" The girl answered: "Czechia, I want to see Czechia most of all. Well, and Paris also." Why Czechia? There are lots of more famous places. She didn't explain, but I knew she mentioned it because of Petra. She believes Czechia is a kind of paradise inhabited by thousands of people like Petra.

Western Europeans are different. They managed to establish fair regimes in their countries, and if somebody asks Chechens how they prefer to live, most of them will definitely say: "We'd like to live like Western Europe."

Moreover among the European countries there are at least five states (plus Baltic republics) that share Chechens' attitude towards Russians. Poland, Czechoslovakia, Hungary, Germany etc. were suppressed by Russian communists (to people that means "by Russians") for 40 years and this common experience brings the peoples of these countries closer to each other, especially in a case like the Chechen War.

Americans are a bit different for Chechens. The common view is, they are not complete enemies like Russians but definitely they are not friends. The reasons are: Israel (Chechens express extreme anti-Semitic views); Iraq; and the readiness to support Russia if it is politically beneficial for America.

And to tell the truth, there are not many Americans in Chechnya. They don't appear, don't help as much as Europeans do. Guests from the European Council come to Chechnya quite often; a special OSCE mission is established there and it is working on permanent basis but there are no such signs of American involvement. For Chechens it looks as if "the United States doesn't try to help us out because they don't see it as a problem if a state kills and discriminates against its own citizens.

As for the Muslim countries, it's not at all clear to me. Turkey - yes. Chechens know Turkey quite well and they like it very much. But they are not great fans of strict shariat rules, and I never heard anybody praying to get the Saudi Arabian or the Pakistani way of life. In brief, Chechens highly respect Muslim society but for the most part they don't want to be part of it. Why? well, I think it is because they were part of the USSR for the last 70 years. During this period they were living m a secular society without severe shariat restrictions. Naturally they don't want to lose their freedom now. Especially Chechen women, who are widely involved in business activities and play important and active role in the economy, administration and the mass media. . 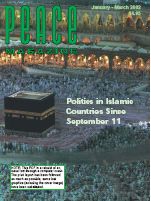 Search for other articles by Julia Kalinina here