Little was said in the recent spate of comment on Pierre Trudeau's life and times about his foreign policy, except for standing up to the Americans, in itself an overstated analysis. I first worked with him in 1966 when he was a member of the Canadian Delegation to the U.N. General Assembly and became so annoyed about our instructions on dealing with South Africa that he declined to deliver them (I had to). After his rise to the pinnacle of power in 1968 we, in the Department of External Affairs, set about trying to implement the priorities of "Foreign Policy for Canadians," the blueprint for basic foreign policy on national interests, beginning with "economic growth" and downgrading "peace and security" to lower priority. He was skeptical of our role in NATO (not, however, the first P.M. to question the size of our NATO commitment) and opposed to the basing of nuclear weapons in Canada.

The search for a more independent foreign policy ran aground on the shoals of North American realities - trade, in particular, and later, defence, although we did manage to extend our control of coastal resources and to provoke U.S. anger over Cuba. Paul Martin had long been gingerly moving toward official recognition of China's communist government, so it was not a surprise when Trudeau took the final step. Nor was it really surprising that he should seek to soften cold war tensions, a traditional Canadian concern. In addition, Trudeau inherited and continued a strong Canadian role in the Commonwealth. On the whole, therefore, and despite the gloss of "Canada First," Canadian foreign policy under Trudeau remained much as before. Two initiatives did mark his later period in power. The first was the "strategy of suffocation" of the arms race, which he unveiled at the United Nations in 1977. This included a comprehensive test ban, a ban on the flight testing of new strategic missiles, a stop to the production of fissile material for nuclear weapons, and reductions in defence spending. The fissile material proposal led later to a Resolution in the General Assembly (it is still under debate), but the rest was too much for the nuclear weapon states to contemplate (the CTB took another twenty years to be signed). In the Department, however, the strategy was pursued by the appointment of a new Adviser on Disarmament (me), a position not filled since early in the '60s.

The second initiative was his decision (and this was his own decision, unlike the disarmament proposals earlier) to travel to world capitals in 1983-4 in an effort to ease mounting tensions between the superpowers. These had climaxed in late August with the destruction of a Korean passenger jet over Soviet territory and the loss of American and Canadian lives. At the time, I was Ambassador in Moscow and had concluded from the fanciful explanations of Soviet officials - "it was a spy plane" - that the Soviet pilot had acted without instructions. On my return to Canada in September I was asked to help pave the way for the P.M.s visits to Moscow and Beijing, after he had first consulted European leaders. The final stop was to be Washington.

Gromyko received me in Moscow, and while he could make no commitment about a meeting with Soviet leader Andropov, who was ill, he showed a cautious interest in the main Trudeau proposal of a meeting of the five nuclear weapon states. I was able to tell him that China had agreed to receive the P.M. and I was given no reason to doubt that the Soviets would too as soon as convenient (Andropov's replacement did in fact do so in February 1984). I Left Moscow to join the P.M. in Tokyo and then Beijing. The Chinese said they would only attend a five power meeting if the USA and the USSR first led the way to reducing nuclear stockpiles. Deng harangued us for forty minutes about Soviet duplicity and was clearly not ready to believe that the great powers would lead the way to control the arms race. But he showed respect for Trudeau (on his second visit as P.M.) and urged him to continue his efforts.

These came to an end in the new year after an unproductive visit to Washington, although the president did, in fact, begin to mute the sharp tone of his anti-Soviet rhetoric soon after the Trudeau visit. So the peace mission was hardly a high point in the history of Canadian diplomacy. Whether it was worth the effort is another matter. I think it was. After so much early skepticism about the traditional Canadian role in World affairs, it demonstrated that the role is inherent in Canada's situation and in the psyche of Canadians, including that of Pierre Trudeau.

A notable legacy of the mission was the creation of the Canadian Institute of International Peace and Security in 1984. The Institute was of significant benefit both to the NGO and to the scholarly communities, and during its short lifetime it gave to Canada a reputation for innovative and practical research into peace and conflict that kept alive the hopes and aspirations of a unique contribution to Canadian leadership in the search for a safe future. 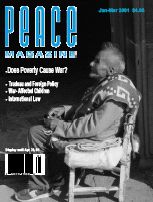 Search for other articles by Geoffrey Pearson here