The dust and noise of the vaunted peace process have settled down into a threatening silence where preparations are being made for the probable next round of violent confrontations between Israel and Syria, between Israelis and Palestinians, between Jews and Arabs. Now is the time to analyze the requirements for a real peace process and explore the intentions expressed in the Final Status Negotiations between Israel and the Palestinian Authority. To my mind Israel is trying to impose its dictates on the Palestinian Authority and on surrounding countries without addressing the problems millions of Palestinians face in their everyday life in the region. "Imposing" a peace agreement is a contradiction in terms. Such an effort is the result of the overwhelming power of Israeli might, but it will not establish the needed foundations for a future lasting peace between the peoples. It will only set the stage for future wars. Here, therefore, I will address fundamental problems for bringing about a just peace.

There are three main problems that render the present peace process futile. The first problem is the unresolved question of the Palestinians' "right of return." The second is the disputed sovereignty of the Palestinian state, epitomized by the unresolved status of Jerusalem. The third is the water dispute throughout the Middle East, with all its political and democratic ramifications.

To some extent Israel as a Jewish state is based on the acknowledgment of the exclusive rights of Jews to return to their historic homeland. Such exclusiveness depends on denying or downplaying the historical fact that Palestinians were kicked off their land in 1948, in 1967, and in 1982 during the recurring violent confrontations with Israel. The disavowal of any responsibility for Palestinian dispossession by Israel represents the continuation of its war mentality.

The Palestinian Refugees' problem - whether they have a right of return - was internationally recognized as a problem urgently in need of a solution. The 1951 Geneva Convention and the United Nations, in various commissions and resolutions which have been ratified on numerous occasions since the early 1950s, unequivocally declared their commitment to resolve the Palestinian refugee problem. Hence the Palestinian rights of return, restitution, and compensation are internationally recognized as what Edward Said calls "the core of Palestinian depredations." Negotiations that ignore this problem cannot lead to peace, but only continue the war by non-military means.

The Palestinian "right of return" would constitute an acknowledgment that the Palestinian Arabs, like the Israeli Jews, have nowhere else to go but must either stay in, or return to, to their country. Palestinians fled or were expelled in 1948 and 1967 from Palestine, and the only place to which they can "go back" is Palestine. All other suggestions or demands presented by Israel -*whether it is the preposterous claim that the refugee problem should have been resolved by "other Arab countries" or that Israel has no responsibility for the refugee problem - are ludicrous or irrelevant. Israelis and Palestinians are the only peoples who can solve the refugees' problem; Israel and Palestine are the only states that must work on it. This will be the most significant outstanding issue between Israel and Palestine until it is addressed.

The refugees' problem can be resolved only within the confines of Palestine, which is an internationally recognized, bounded territory. For this to be effected, Palestine's sovereignty must be upheld and respected. Today Israel has almost full control over crucial decisions pertaining to borders, security and economics, immigration policies, citizenship rights, and movement of citizens, including the right of return; this situation is not conducive to a peace settlement. The Palestinian state in the Gaza strip and the West Bank must be recognized as the Palestinian homeland.

Israelis and Israel have to acknowledge that the establishment of the state of Israel and the rescuing of Jewish refugees from European ruins and the Holocaust was done at the expense of the Palestinians inhabitants of Palestine. Accepting the Palestinians' right of return is not a concession Israel is giving from sheer good will to Palestinians. Instead, that right is the first demand that must be tackled if a lasting peace is to be worked out. It is not optional, but a moral and practical imperative.

The task facing Palestinians is to transform their just demand for the right of return from a quest for revenge to a quest establishing the humane foundations for a lasting peace. And this is a huge endeavor because Palestinians cannot go back to the places from which they fled 52 years ago. Today these places are either inhabited by Israelis or were erased from the face of the earth. Palestinians must be compensated and rehabilitated, either in the Palestinian State or in any other third country of their choice, with the active, political, financial and moral assistance of Israel and Palestine. Palestinians will not be able to return to Israel, but Israel will have to recognize the full sovereignty of the Palestinian state, not only with regard to its borders and its right to implement the right of return but also with regard to the status of Jerusalem or El-Quds.

Many Israeli politicians declare Jerusalem to be the eternal and exclusive capital of Israel and Jews. Such a declaration is a flagrant denial of reality, of course. Jerusalem is an international and religious symbol for millions of non-Jews and non-Israelis; Jerusalem/ El-Quds is a Palestinian center of identity and the home of hundreds of thousands of Palestinians who permanently perceive Jerusalem as the Palestinian capital.

Since Israeli politicians talk only about rights of ownership, not about rights of use, the only way to reconcile the contradictory declarations with the reality of Jerusalem is for one side or the other to use force. That would amount to the exclusive control of the city by one side, which would grant the other side a conditioned "privilege" of use. That would again be a continuation of war by means other than military ones.

However, if we change our conception to one of "use rights" instead of "ownership rights" there need not be any irreconcilable problem with the geographical fact that a Palestinian Parliament would be built three or four kilometers from the Israeli Parliament. Why does such a trivial factual reality cause such alarming animosity? This is the situation because the question of Jerusalem demands the acknowledgment that the Palestinians are a people with an equal right to that of the Jewish people for a state and capital in Palestine. So the question of Jerusalem / El-Quds is in fact the problem of recognizing the sovereignty of the Palestinian people. Without this recognition, the negotiation of a final status will not lead to a peaceful future for the two peoples.

The most important resource for people who live in the Middle East is water, not oil. Oil is also the most important resource of the Middle East for people who do not live there. Middle Eastern oil fuels the cars, heats the houses and runs the machines of Europeans, Japanese, and Americans. Oil also enriches the very rich of the Middle East and the individuals and states who sell arms to the region's rulers. But for the people of the Middle East, water is the resource without they cannot remain in their homes and continue living. All efforts to solve its shortage will require democratization and a shared responsibility over the resolution of water shortage. Water can be acquired by desalination, efficient methods of use, preservation of drain water, and better use of great water sources such as the sea of Galilee and its tributaries, the Nile and the Euphrates. For these changes to be realized, a different frame of mind is needed in addition to the conversion of resources from military uses to peaceful purposes.

A courageous peace initiative would entail tackling these formidable issues on their psychological and emotional as well as on their material and financial levels. For such an endeavor one needs the courage that goes with trust, not with enmity. In the Middle East we have raised heroes with the bravery needed for firing arms and sending people to their death, but not with the humane courage necessary to help people to lead a life of responsibility and hope for their next generation. In the name of lost causes and twisted so-called interests, many are still fighting redemptive wars, though it is well known that after the next general war in the Middle East there will be only vanquished people. Since Israel is the most powerful country in the region and is disproportionately powerful vis-B-vis the Palestinians, it is up to Israel to initiate concessions and establish the basis for trust.

However, there is a deep incongruity between the actual circumstances of the power game in Israel and the ideology that guides its leaders. Whereas Israel's military might is overwhelming, its leadership is still being guided by an ideology nurtured on Jewish victimhood and suffering. While Israeli leaders are wielding power mercilessly, they present themselves to their people and themselves as the victim of merciless circumstances and of hatred against Jews. Accurate appreciation of Israel's power should have been the first lesson of the Israeli politicians, but they prefer to hide behind a "veil of ignorance" in which Israel is never depicted as what it really is: the neighborhood's bully.

What are the common interests of Israelis and Palestinians? If both peoples have a huge problem of settling and rehabilitating refugees; if Jerusalem is the city in which both these peoples have their capital; and furthermore, if both Middle East Cont'd. from p.24

countries and people depend on a common strategic scarce resource - water - for their very survival, why not see all the commonality embedded in these problems instead of focusing on the contradictions? Why focus on opposing interests instead of the complementary ones? The answer lies in the prevailing frames of mind.

A Frame of Mind

It is a warrior frame of mind. It needs the bravery of a warrior - the kind of bravery that burns places to ashes, the kind of courage that is nurtured on the destruction of the other. To see in the question of the Palestinians' right of return, in the question of Jerusalem/ El-Quds, and in the water question common, not divergent interests, needs a different frame of mind. Such an attitude belongs to peace activists, not to war generals. It is peace activists who restore places torn by war, places burnt down to ashes, peoples who were tormented by terror and ruined by loss.

Within a peaceful frame of mind, rehabilitating refugees or sharing Jerusalem is not a problem to fear but a blessing to celebrate. Bringing back refugees and rehabilitating their souls and homes is an ennobling endeavor within a peaceful frame of mind. Working out methods to transform water scarcity into an abundance of gardens and orchards is the work of the peaceful frame of mind. So there are common grounds for Palestinians and Israelis. We need to change the warrior leaders from leaders who understand only the language of violence to leaders who can talk out their differences in dialogues with each other.

Meir Amor is a sociologist teaching at McMaster University in Ontario.. 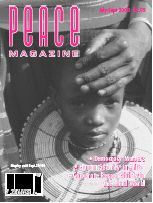 Search for other articles by Meir Amor here