In "Democracies Don't Fight Democracies" (Peace Magazine, May/June 1999), R.J. Rummel has provided a thorough analysis of how Western democracies are not in the business of waging war with one another. Indeed, if more countries were allowed to operate as democracies war might certainly be reduced. But this will never occur so long as today's powerful democracies continue to rule the world in an extremely undemocratic fashion. Countries such as Canada, Britain, France and the United States afford their own citizens a substantial degree of democracy. The economic and political powers of these nations are reliant on their continuing domination of global markets, international governing bodies such as the United Nations, and the most powerful military organizations in the world. Western democracies, and their corporate partners, are the richest nations on the planet due to continuing political instability and violent conflict abroad. Multinational corporations, the international arms trade, and gunboat diplomacy make the world's democracies strong. Most democratic nations exist today because they operate undemocratically on the international stage. And their power is dependent upon the existence of dictatorships and disorder elsewhere. Hence, the relevance and usefulness of Professor Rummel's study is unclear, if an end to war is to be our objective.

Western democracies export war and poverty, two of the most fundamental barriers to democracy. If inequality breeds conflict and hinders the possibility of democracy, then weapons guarantee war will be the final outcome. Today's democracies hold a monopoly on all of this. An historical analysis is necessary. Colonialism, genocide, slavery and mercantilism are what made today's democracies powerful in the first place. Even if various colonies gained independence with relatively little violence, as Rummel states, the ideals of colonialism and exploitation were much more prevalent in practice than the ideals of democracy. It has been a common case of "do as I say, not as I do" ever since. While the governments of North America and Europe demand that democracy flourish in every corner of the globe, it is these same states which, in practice, ensure that democracy is kept out of global economic and political arenas. Today's democracies demand that humanity's means of survival be governed in the most undemocratic method possible.

Take the recent war between NATO and Yugoslavia as an example. Only a few years ago, Serbians and ethnic Albanians were nonviolently demonstrating in the streets against Slobodan Milosevic's tyranny. If the democracies of the world were at all concerned about fostering democratic rule and human rights in Yugoslavia, they would have lent international support to these demonstrators who were on the verge of attaining critical mass. But that was when the West regarded Milosevic as the man most likely to bring stability to the Balkans. It was of no concern to NATO members at the time that the Yugoslav government had already begun committing blatant and massive human rights violations. Then, in 1999, the democracies of the world suddenly decided to bomb all of Yugoslavia, but not because democracy was threatened or because people were dying, but rather because Europe's new dictator was no longer bowing down to the much larger Western dictators.

Sadly, the situation in Yugoslavia is but one of countless illustrations where tyranny in the name of democracy encouraged war to exist and to grow. In fact, some of the worst dictatorships in the world, such as Saddam Hussein's Iraq, are continuously strengthened by our democratic governments refusal to include human rights, nonviolence, and conflict mediation in foreign policy. And the problem is more serious now than ever before.

Multinational corporations, the back-bone of the Western economies, rely almost completely on the exploitation of peoples and resources worldwide. The quickest and most efficient way to guarantee the availability of people to exploit is through war. Colonialism only started the ball rolling. Political instability and intra-state conflict ensures that poverty and displacement will continue to prevail among the world's majority. And then, it is also today's democracies which supply the weapons to wage the world's wars, legally if applicable, illegally if necessary. Finally, the fact that most wars today are intra-state, ethnic, and civil conflicts, assures Western political and business leaders that violence will not threaten their cherished democracies. In addition, domination over the U.N. and the prevalence of the myth that trade and human rights are not related, justifies the dictatorial actions of the world's democracies and helps our politicians sleep at night.

There is a very important reason why this response to Professor Rummel's study is necessary. There is a real danger that the Bill Clintons and Tony Blairs of the world will use such a premise to continuously justify Western dictatorship over the planet's political, economic, and military institutions and resources. While the spread of democracy may decrease the potential for war between democracies, it does not decrease the potential for war elsewhere. The fact that world democracy, market democracy, democracy for civil society, and democracy over the means of production and the means of force do not exist, means that real democracy will not be allowed to spread to the rest of the world. Democracy, whether in Washington or Baghdad, will never come to fruition unless it comes from civil society itself. United Nations reform, an end to the arms trade, an abolition of the most regressive elements of global society, namely multinational corporations and the World Bank, are all good starting points if it is peace and democracy that we strive for. We can surely learn how to do this from the human rights activists in Burma or the peace activists in Canada, before learning anything from the world's "democratic" leaders.

Kevin Shimmin, who has lived in Sri Lanka, works with the Peace Research Institute, Dundas, Ontario. 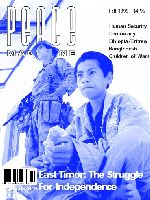 Search for other articles by Kevin Shimmin here