Ministers and representatives of the Governments of Austria, Canada, Chile, Ireland, Jordan, the Netherlands, Slovenia, Switzerland, Thailand, and Norway met at Bergen and Lysoen, Norway on May 19-20, 1999 to address human security issues. South Africa participated as observer.

The first day was an open meeting. The United Nations High Commissioner for Refugees (UNHCR), H.E. Mrs. Sadako Ogata delivered a keynote speech, emphasizing that refugees and internally displaced persons are a significant symptom of insecurity. From a refugee perspective there is an urgent need to address the issues of human security comprehensively, both during and after conflicts.

Mrs. Ogata asked how the international community lets conflicts simmer until both "hard" and "soft" means seem inadequate. She called for a more timely, yet gradual and stratified approach, based on the idea of a "ladder of options" to be implemented before crises precipitate. A range of "medium" alternatives, such as providing training and support, could apply to refugee situations and other situations of insecurity.

Mrs. Ogata also emphasized the need for programs in post-conflict situations. She pointed out that the UNHCR, together with the World Bank, the U.N., and donor governments, are exploring ways to improve funding arrangements during the transition from a humanitarian crisis to reconstruction and long-term development.

Safety is the hallmark of freedom from fear, while well-being is the target of freedom from want. Human security and human development are thus two sides of the same coin, mutually reinforcing and leading to a conducive environment for each other.

The international organizations created by states to build a just and peaceful world order, above all the United Nations, must promote sustainable development. Here are some of the ideas that emerged from the consultations .

International cooperation between like-minded countries within regions and within the United Nations, is essential. This should include international financial institutions.

The threats to human security differ in different regions of the world, as do the resources to address those threats. Accordingly, a flexible framework of cooperation is required.

ELEMENTS OF AN AGENDA

The following challenges and responses were identified:

Rid the world of them by:

Intensify efforts against the accumulation and uncontrolled spread of small arms by:

Address the needs of children in armed conflict by:

Strengthen cooperation in the fight against sexual exploitation of children, including child pornography through the internet.

Hold entities accountable for intentionally directing attacks against humanitarian workers in territory under their control.

Strengthen the capacity of the United Nations and regional organizations to develop cooperative strategies for conflict prevention.

Develop an effective framework within the U.N. system to combat transnational organized crime, in particular through completing the negotiations of a Transnational Organized Crime Convention and its protocols by the Year 2000.

Fulfill the target at the Copenhagen Summit for donor countries to allocate 0.7 percent of their GNP to official development assistance (ODA).

The Lysoen Conference was hosted and chaired by the Norwegian Foreign Minister. 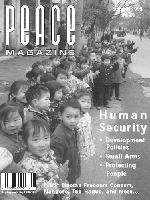