On March 23 the Canadian parliament passed a motion calling for the government to "enact a tax on financial transactions in concert with the international community." Canada is the first nation so far to adopt this proposal, known widely as the "Tobin Tax," which will (if adopted by a number of nations) be a means of cooling speculative capital and raising funds for social programs. An NDP member, Lorne Nystrom, led the parliamentary action with the support of numerous church groups and NGOs.

On April 27, a scheduled Montreal air show was cancelled because the organizers recognized the inappropriateness of putting on as a form of family entertainment a display of the kinds of aircraft then engaged in bombing Yugoslavia.

This decision resembles a previous cancellation in 1991 when a military trade show was finally cancelled due to peace movement opposition and the poor public relations effect that would result from holding a weapons bazaar just after the war against Iraq.

Nearly 5000 people filled the streets of Vancouver on May 1 for an annual parade, saying "Stop the bombing. Negotiate peace." The walk was organized by End the Arms Race, Stop the Bombing Initiative, the Vancouver and District Labour Council, and many other trade unions and non-governmental organizations.

The word from Ashkelon prison is that Mordechai Vanunu has been in good spirits this spring.

Moreover, Sam Day, the leader of Vanunu's campaign in the United States, is pleased with the recent progress of the American efforts. Some 36 Congressional Representatives have signed an appeal asking President Clinton to intercede on behalf "of a man who lingers in prison simply for his belief in global peace." This letter notes that nuclear weapons experts, including Dr. Joseph Rotblat, have certified that Mr. Vanunu had nothing further to reveal that could in any way jeopardize the security of Israel.

Fredrik S. Heffermehl, Norwegian leader of the International Free Vanunu Committee, announced that there would be opportunities for participants in the great peace conference in The Hague to meet and discuss Vanunu's plight with Nobel laureates and Secretary General Kofi Annan.

The NATO Summit in Washington D.C. , April 23-25, opened the door to a broad review of its nuclear weapons policy. Although NATO's 1999 Strategic Concept showed only scant movement over 1991 on nuclear weapons, the Summit Communique committed NATO to a review.

The Communique stated, "In the light of overall strategic developments and the reduced salience of nuclear weapons, the Alliance will consider options for confidence and security-building measures, verification, non-proliferation and arms control and disarmament. The Council in Permanent Session will propose a process to Ministers in December for considering such options. The responsible NATO bodies would accomplish this. We support deepening consultations wtih Russia in these and other areas in the Permanent Joint Council."

These developments were missed by reporters who read only the 65-paragraph document, "The Alliance's Strategy Concept," which reaffirmed NATO's commitment to keep nuclear weapons for political reasons. The 1999 version repeats the 1991 language, so that at first glance it seems that NATO has not moved.

Actually, however, there are subtle shifts in the new Strategic Concept. For the first time, NATO has spoken seriously about disarmament. It also states that NATO's nuclear forces no longer target any country. This seems to be only modest movement so far, but read in the context of the Communique's commitment to start a review process, these small steps take on added significance.

Undoubtedly NATO's leadership is proceeding to a review grudgingly, but the door has been opened. This gives the Non-Nuclear Weapon States in NATO a new opportunity to press for a quality review, not just a perfunctory one. This is an important gain for many non-governmental organizations and for the Middle Powers Initiative, which has been credited by Canadian officials with stiffening Canada's resolve to urge this action upon NATO. 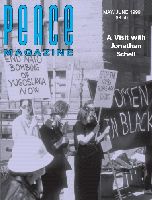