The Peacemaker and the Great Law

The Peacemaker came across Lake Ontario to the Iroquois around 500-1500 years ago with a vision of peace and of ending cannibalism. Upon landing, he said to the chiefs of the Iroquois nations, "Bring me the worst people in your territory." He was led to the home of a man who had piles of human bones outside his house. The Peacemaker heard someone coming from the woods so he hid on top of the dwelling. A man entered his lodge carrying a human body over his shoulder. He built a fire and started chopping up the body to put it in his cooking pot. The Peacemaker looked down through the smokehole, then climbed off the roof, entered, introduced himself, and told the man that what he was about to do was wrong. He talked four days and nights, explaining that if the man used the right solutions to his problems, people would be happy, but if he used violence, his death would result.

The Peacemaker said, "We will create governance for the purpose of ending human beings' abuse of each other. Conflict arises out of injustice, so we must speak to issues of injustice. When we have a just world, we will have peace." He and his speaker, Ayonwatha, brought this message to chiefs and warriors, helping them consider the kind of future they would like and how to achieve their goal. Forty-nine discussions occurred, with 49 chiefs, the craziest of whom was the chief of the Onondagas. The whole group who had accepted the Peacemaker's message went to confront him. They found him sitting on a pile of thorned mats, with live snakes woven into his long hair. His eyes shook in horror and he could not focus them. He wanted to acquire power with murder. They offered him a chance to accept the good mind. Otherwise they would have to eliminate him. The only real threat to human survival is insanity - people unable to think clearly about other human beings. Clearly, he fit into that category. They explained the purpose of the gathering: to get nations to use thinking instead of violence. The people would gather under the Great Tree of Peace, where they would leave their weapons. They would no longer use weapons, but if necessary, would defend righteousness and unity with warfare.

The Great Law of Peace went first to people who agreed not to use weapons among themselves. The idea was to extend the peace outward, from four white roots of the tree, to the whole world. The Peacemaker said, "A time will come when the nations of the world will all sit under the Great Tree and use their minds to solve their problems; warfare will become obsolete." The Great Law was to unite to establish lasting peace, though initially some nations might not join. The task would be to educate them about the potential of human beings to benefit the future.

The Peacemaker talked eloquently about the people who are to take responsibility for the well-being of generations yet unborn. Injustice is caused by the desire for power, the desire of nations for boundaries, the desire of people for wealth, and the inability of people who speak different languages to come to one mind. "What we do on this day," the Peacemaker said, "will affect seven generations, and we must use our clearest thinking and our purest thoughts to eradicate injustice."

The Peacemaker seated everyone in a circle. He handed the first man a bowl of soup and told him to drink from it and pass it to the next person. As the bowl circulated the Peacemaker said, "We will drink from one common bowl. When we come here to the council, we will adopt civilized behavior. When people are here to put their minds to the problem of survival, we will be careful not to use words that cut anyone else. Our diplomacy is a version of our future as human beings."

He set rules for conducting business. The first rule was to make three attempts to call on anyone who is engaging in violence to ask him to stop. After the third request, the combined strength of all the people who believe in the Great Peace would be used to end the violence. The nations require people to stop fighting and then they withdraw their forces and invite them to join the Confederacy. At one time there were about 63 other Indian nations gathered around the Five Nations as one unit.

The Peacemaker described human nature as embodied more in treaty-making than in the Great Law. Negative emotions diminish the ability to think clearly. We have to pay attention to how our emotions invade our thinking. When the Iroquois sit down to do business with a person, the first thing they do is send wampum belts over to him one at a time, each one bearing a message. The first wampum greets the people who have come, symbolically brushing and cleaning them off from their journey. The other wampums that are sent across the room say, "With this wampum I wipe the tears from your eyes; with this one, I take the lump out of your throat as you think about the losses you have suffered in our conflict. With this one, I rub the blood off of your clothing and with this one I brush off your seat. With this one I take the tightness out of your chest and with this one I take the pain out of your heart. With this one, we now clear emotions of hatred toward each other so that we can do our business. The last wampums assure that we will put our minds together as one and think clearly for the kind of life we will create for future generations."

The Peacemaker set up the Five Nations as non-hierarchical, with balances and counter-balances. As with the U.S. Senate and the House, some issues arise in one house and go to another in accordance with the Great Law. The concept of two houses and a judiciary existed in the North American forest before Columbus set sail for the New World.

The Five Nations' Constitution recognized that law is what is important. Humans come and go, but the law stays and provides means for people to negotiate their freedom. It gave women formal recognition of their power in council; It provided for freedom of religion, freedom of speech, and freedom of conquered peoples against taxation by the conquerors. All peoples of the world can gather under a law, thinking about the future.

The French encountered this thinking when Champlain came down the shore of Lake Champlain. Before the Mohawks ever said a word to the French, the French opened fire with a volley of musketry. The Iroquois went to them and asked what all the shooting was about. The French answered, "The Ottawas have beaver furs. We came here for the furs. We're allies with the Ottawas, and they said to shoot at you because this is what one does as an ally."

The Iroquois believed that the earth belonged only to the Creator. The concept of land as property created injustice. Humankind is a product of nature and nature provides for humans. Humans have to be integrated with nature because nature is rational. If people do not believe nature is rational then they feel they have permission to kill nature just as they would kill an irrational man. Our ultimate survival depends on the survival of nature.

The path of human domination - over animals, plants, waters, the world - is the path of desolation. The idea that fear of nature will lead to human destruction is profound; it is found neither in the Bible nor the classics. Many perceptions about humanity's role within nature are not to be found in Indo-European thought, but can be found in the thinking of the Indian peoples. Were they to be acted upon, a new revolution in world thinking could occur, possibly as profound as the changes that resulted from the first contacts between peoples.

This is an abridged article from The Great Peace, a new CD-ROM about Native culture. For information on how to order it, contact Working World Training Centre at 519/753-1111 or visit the website: <www.greatpeace.org>, or by email: <jburnham@workingworld.ca>. 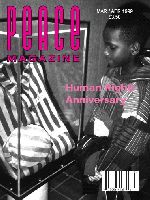 Search for other articles by John Mohawk here