For the Twenty-First Century

Abridged Excerpts from the Report of the Standing Committee on Foreign Affairs and International Trade,which was released on December 10, 1998.

The Committee recommends that the Government of Canada adopt the following fundamental principle to guide its nuclear non-proliferation, arms control and disarmament policy, within an overarching framework encompassing all aspects - political, military, and commercial - of Canada's international relations:

That Canada work consistently to reduce the political legitimacy and value of nuclear weapons in order to contribute to the goal of their progressive reduction and eventual elimination.

In order to implement this fundamental principle, the Committee recommends that the Government of Canada issue a policy statement which explains the links between Canada's nuclear non-proliferation, arms control and disarmament policy and all other aspects of its international relations. It must also achieve a basis for ongoing consensus by keeping the Canadian public and parliamentarians informed of developments in this area, in particular by means of:

Annual preparatory meetings - held, for example, under the auspices of the Canadian Centre for Foreign Policy Development - with non-governmental organizations and representatives of civil society before the annual meeting of the U.N. Human Rights Commission;

An annual public appearance before this Committee by the Ambassador to the United Nations for Disarmament Affairs; Strengthened coordination between the departments of Foreign Affairs and International Trade and National Defence, in the first instance by the inclusion of a representative from National Defence on Canadian delegations to multilateral nuclear non-proliferation fora.

The Committee recommends that the Government of Canada intensify its efforts, in cooperation with States such as its NATO allies and the members of the New Agenda Coalition, to advance the process of nuclear disarmament. It must encourage public input and inform the public on the exorbitant humanitarian, environmental and economic costs of nuclear weapons as well as their impact on international peace and security. In addition, the Government must encourage the nuclear-weapon States to demonstrate their unequivocal commitment to enter into and conclude negotiations leading to the elimination of nuclear weapons.

The Committee recommends that the Government of Canada explore additional means of both providing more information to Canadians on civilian uses of nuclear technology, and receiving more public input into government policy in this area. As one means of achieving this, the Committee also recom- mends that the Parliament of Canada conduct a separate and in-depth study on the domestic use, and foreign export of, Canada's civilian nuclear technology.

In the interest of increased nuclear safety and stability, and as a means to advance toward the broader goal of eliminating nuclear weapons, the Committee recommends that the Government of Canada endorse the concept of de-alerting all nuclear forces, subject to reciprocity and verification - including the arsenals of the permanent members of the UN Security Council and the three nuclear-weapons-capable States - and encourage their governments to pursue this option.

The Committee recommends that the Government of Canada take all possible action to encourage the United States and Russia to continue the START process. In particular, Canada should encourage Russia to ratify START II, should provide concrete support towards achieving this objective, and should encourage like-minded states to work with Russia to ensure increased political and economic stability in that country. Beyond this, Canada should urge both parties to pursue progressive and reciprocal reforms to their respective nuclear postures.

Given its potential contribution to nuclear safety and stability, and the need to act promptly to address the possible implications of the millennium bug, the Committee recommends that the Government of Canada explore further with the United States and Russia the feasibility of establishing a NORAD "hotline" to supplement and strengthen Russia's missile early warning system. Canada should also support the broadening of such a mechanism to include other nuclear-weapons-capable States.

The Committee recommends that the Government reject the idea of burning MOX fuel in Canada because this option is totally unfeasible, but that it continue to work with other governments to address the problem of surplus fissile material.

In view of their responsibilities as nuclear-weapon States under the nuclear Non-Proliferation Treaty and as Permanent Members of the United Nations Security Council, the Committee recommends that the Government of Canada encourage the United Kingdom, France and China to: increase transparency about their nuclear stockpiles, fissile material and doctrine; support the call of Canada and other States for the substantive discussion of nuclear disarmament issues at the Conference on Disarmament; and explore with the United States and Russia means of preparing to enter nuclear disarmament reductions at the earliest possible moment..

The Committee recommends that the Government of Canada continue to support all international efforts to address the underlying regional security issues in South Asia and the Middle East. Working with like-minded States, it should take a more proactive role in stressing the regional and global security benefits of immediately increasing communication and cooperation between States in those regions as a means of building trust. In both regions - but particularly in South Asia given the recent nuclear tests - Canada should also stress: the freezing of nuclear weapon programs; adhering to the Comprehensive Nuclear Test Ban Treaty and participating in the negotiation of the Fissile Material Cut-Off Treaty; and joining the nuclear Non-Proliferation Treaty as non-nuclear-weapon States.

The Committee recommends that the Government of Canada work to strengthen international efforts to prevent the proliferation of chemical and biological weapons and missile systems and to ensure adequate funding for verification purposes. In addition to strengthening the Biological and Toxin Weapons Convention through the negotiation of a Verification Protocol and continuing to support the operation of the Chemical Weapons Convention, the Government should also examine methods of increasing the effectiveness of the Australia Group and the Missile Technology Control Regime, as well as cooperation in intelligence and law enforcement to prevent terrorist acquisition of such weapons.

The Committee recommends that the Government, having strengthened the international safeguards regime by signing its new Model Protocol with the International Atomic Energy Agency, use all means at its disposal to convince other States to do likewise. Before entering into a future Nuclear Cooperation Agreement with any other State, the Government should, at a minimum, require that State to adopt the new Model Protocol.

The Committee recommends that the Government of Canada meet annually with the other parties to all Nuclear Cooperation Agreements to review the application of such Agreements, and table a report on the results of such meetings in Parliament.

The Committee recommends that the Canadian Government intensify its efforts, in cooperation with like-minded States, such as our NATO allies, to advance the global disarmament and security agenda:

Canada should reaffirm its support for the nuclear Non-Proliferation Treaty as the centrepiece of the global nuclear non-proliferation regime and should reject any attempt to revise the Treaty to acknowledge India and Pakistan as "nuclear-weapon States" under it. It should also continue to strive to ensure that the nuclear-weapon States honor their commitments to a strengthened review process for the NPT, which will lead to an updated statement of Principles and Objectives for Nuclear Non-Proliferation and Disarmament at the 2000 Review Conference. Canada should complete the process of ratifying the Comprehensive Nuclear Test-Ban Treaty as quickly as possible and urge all other States to do likewise. Should India and Pakistan refuse to accept the Treaty unconditionally, Canada should nevertheless encourage the international community to ensure the Treaty's legal entry into force. Canada should play a strong role at the Conference on Disarmament in the forthcoming negotiations for a broad Fissile Material Cut-Off Treaty which will serve both non-proliferation and disarmament objectives. Canada should support the establishment of a nuclear arms register to cover both weapons and fissile material as proposed by Germany in 1993. Canada should support the call for the conclusion of a nuclear weapons disarmament convention.

The Committee recommends that the Government of Canada argue forcefully within NATO that the present re-examination and update as necessary of the Alliance Strategic Concept should include its nuclear component.

The nuclear Non-Proliferation Treaty (NPT) has been remarkably successful to date. However, if this 30-year old international consensus is not to unravel, there must be renewed political commitment and prompt action by all States, and particularly by the nuclear-weapon States.

Following an understandable lull in public attention to the issue immediately after the end of the Cold War, Canadians remain deeply concerned about nuclear weapons. They also demand that their government build on its strong record in this area and play an even stronger part in non-proliferation and disarmament issues.

With the end of the danger of all-out nuclear war, public and political attention understandably turned to other issues. The past several years have therefore seen progress stall in this area. It is tempting to lay the blame for this state of affairs on the five nuclear-weapon States committed to eliminate their arsenals under the NPT and the three other nuclear-weapons-capable States that have not accepted international norms in this area. The blame must, however, be shared by all States, including Canada, for not sustaining the political pressure necessary to keep this issue at the forefront of international concerns. The Indian and Pakistani nuclear tests of May 1998 signal that the nuclear status quo cannot be taken for granted.

NATO is currently engaged in a re-examination and update of its 1991 Strategic Concept, to be completed by April 1999. Members do not all have the same view of the future of NATO, but all agree that the Government of Canada must work to convince its NATO allies that the updated Strategic Concept must reflect recognition of the need to reduce reliance on nuclear weapons wherever possible.

Priority must be placed on persuading all NPT states to accept the new strengthened Protocol developed by the International Atomic Energy Agency as soon as possible.

Prohibiting nuclear weapons will not be achieved quickly or easily, but the requirements for it are clear. These are: the re-commitment on the part of all States to the principles and obligations contained in the nuclear Non-Proliferation Treaty; com mitments on the part of the United States and Russia to continue and go beyond the bilateral START process, of the United Kingdom, France and China to increase transparency about their nuclear arsenals and doctrines, and of all five States to accept the substantive discussion of disarmament issues at the Conference on Disarmament; a commitment on the part of Canada and other States to emphasize the importance of these issues at all opportunities, even at the risk of tensions within the NATO Alliance or bilateral relationships; and the need to reduce regional tensions in South Asia and the Middle East, and to convince India, Pakistan and Israel to accept the global nuclear non-proliferation consensus and dismantle their nuclear programs.

Ambassador Mark Moher will put [Canada's] leadership to good use as he chairs the negotiations at the Conference on Disarmament on a Fissile Material Cut-Off Treaty. Despite its technical aspects, the challenge of moving toward the prohibition of nuclear weapons remains fundamentally political and moral. The Committee is convinced that Canada can play a leading role in finally ending the nuclear threat overhanging humanity. 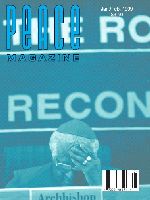