The United States insisted that Saddam Hussein's Iraq be inspected for the presence of weapons of mass destruction. Then why should the U.S. itself be exempt from such inspections?

Citizens' inspection teams are an innovative tool disarmament activists can use to shake up the military and political establishments. They are rapidly proliferating around the world in the wake of the Indian and Pakistani bomb tests. In the past year, there have been citizens' inspections at NATO headquarters in Belgium, the Trident submarine base in Scotland, and the Dimona nuclear weapons facility in Israel. Lawrence Livermore Labs in California, Johns Hopkins University in Maryland, Bath Iron Works in Maine, Tucson Air Force Base in Arizona, Bangor Sub Base in Washington, and the ELF transmitters in Wisconsin were all treated to citizens' inspection teams earlier this year. Each case focused attention on the nuclear states' hypocritical position.

During the first week of August, the U.S. Fellowship of Reconciliation (FOR) inspected two sites in Groton, Connecticut. Groton is the home of the General Dynamics Electric Boat Corporation, manufacturer of the entire U.S. Trident submarine fleet. Tridents carry over 100 nuclear warheads, each with many times the destructive power of the Hiroshima bomb. The U.S. Navy Sub Base in Groton homeports Seawolf and other attack submarines that are capable of firing nuclear-armed cruise missiles and deployed ships to the Persian Gulf during the last crisis over inspection teams in Iraq. FOR's citizens weapons inspection teams disrupted business at the facilities to investigate whether the U.S. government is preparing to commit war crimes.

Indeed, Clinton's recent Presidential Decision Directive makes available to the U.S. the option to use nuclear weapons in a first strike against a non-nuclear state or to deter a chemical or biological attack. The United States is prohibited under international humanitarian law from using or threatening to use weapons which are indiscriminate, violate neutral states, or cause long-term damage to the environment. The World Court reaffirmed this law on July 8, 1996, and stated that the threat or use of nuclear weapons is generally illegal.

Backed by the Nuremberg Principles, which make clear that citizens have a right and a duty to ensure that crimes against peace are not carried out, a team of ten political and civic leaders from Canada, New Zealand, and the U.S., headed by Libby Davies, member of the Canadian Parliament from Vancouver East, traveled to Electric Boat on August 3. While the Clinton administration insists that Iraq must give up all of its weapons of mass destruction and the means to produce and deliver them, Electric Boat is a place where the U.S. continues to build its own delivery systems for weapons of mass destruction.

The citizens' weapons inspection team was received at the entrance by Kevin Cassidy, the company's Vice President of Public Relations, who refused to admit the team to the shipyard or the documentation and photographic evidence of the submarines. Members of the team informed Cassidy of Electric Boat's responsibility under international law to cease producing or modifying ships armed with nuclear weapons, as affirmed by the International Court of Justice opinion of July 1996. Before leaving, the team unfurled a sign in front of the assembled corporate officials and police: "Warning: This Facility Produces Weapons of Mass Destruction."

The citizens' inspection team confirmed that there were submarines under construction at Electric Boat after the attempted on-site inspection with an aerial flight over the shipyard. Their overhead survey also revealed the presence of three rows of seven bunkers suspected of containing nuclear weapons at the Sub Base up the river.

INSPECTING THE NAVY'S SUB BASE

Another citizens' inspection team returned to Groton on August 6 to investigate the Sub Base. Like Electric Boat, the Navy Base rejected formal requests for high-level meetings with the team. To recall the 192,000 victims of the Hiroshima atomic bomb and to commemorate the eighth anniversary of sanctions on Iraq, 75 people from New York and New England gathered at the base entrance to pray, sing, and hear speeches calling for disarmament and de-linking the economic sanctions on Iraq from its weapons inspections. Then, the inspection team approached the guard booth, and were met by a base representative who referred them to the Public Affairs office.

After the team warned that the base was out of compliance with international law, conversation with base officials stalled and the team attempted to carry out their inspection without the Navy's assistance. The inspectors slowly walked with linked hands toward the line of soldiers blocking their way, who backpedaled several hundred feet before they were ordered to stop and pull the inspectors off the road to arrest them. The ten team members were charged with criminal trespass and ordered to appear before a federal magistrate at a later date.

The citizens' inspection teams have prompted both Electric Boat and the U.S. Navy to claim that there are no nuclear weapons present at the sites in Groton, but unless inspection teams are allowed to look, there is no way of knowing the truth. This same approach is being taken by the U.N. weapons inspection teams in Iraq. No nations should be subjected to sanctions that affect the weakest members of their populations, but the U.S. (using the U.N.) is using the weapons inspection system to maintain the sanctions and force unilateral disarmament upon Iraq -- a country which it had armed and supported just a few years before the Gulf War. It is also necessary to subject Iran, Israel, Russia, the U.S. and every nation to a process of comprehensive inspections. Inspections under an independent monitoring system would lead to the disarmament of the ships at the Sub Base, as well as the conversion of Electric Boat to non-military purposes.

The call for transparency assigns citizens a key role in providing verification of weapons systems by means of inspections in a multilateral effort toward world disarmament. Jayantha Dhanapala, U.N. Undersecretary-General for Disarmament Affairs, affirmed the importance of this responsibility in a meeting with FOR's citizens inspection team at the United Nations before the actions. Dhanapala offered his support for "initiatives that increase the role of civil society in pressuring the nuclear weapons states to conclude a binding convention to eliminate nuclear weapons."

In this manner, the FOR citizens' inspection teams called upon the American people to demand that the U.S. government cease relying on nuclear weapons as a cornerstone of the nation's defense, and instead endorse the principle of the Abolition 2000 campaign: namely, to have a signed treaty by the end of the year 2000 that will begin the total elimination of nuclear weapons by a specific date. The recent tests in India and Pakistan demonstrate that the U.S. must disarm its own nuclear weapons in order to have any authority in preventing global proliferation.

As more activist groups adopt the methodology of citizens weapons inspections, the pressure will increase upon the nuclear states to conform to the will of the overwhelming majority of people in the world. Because they adhere to principles of Gandhian nonviolence, citizens' inspections can be successful in achieving societal change in the long-term, especially as long as the U.N. continues to enforce sanctions on Iraq over inspections. Citizen inspectors are polite in manner and dignified in appearance, but firm in their intent. They eschew secrecy and offer a spirit of openness with the local authorities that they seek in reciprocation. The flexibility of the approach allows the inspectors to either respect or break the local law in order to uphold international law, depending on the risks the inspectors are willing to accept and the mandate of their individual consciences.

The two FOR teams styled their inspections differently, but both succeeded in rousing public consciousness and attracting area newspapers, the Associated Press, television stations, local and national radio programs, and even a screenplay writer to the actions, showing the links between nuclear weapons and economic sanctions. With citizens' weapons inspections, activists can shed their protest signs and take a more proactive role in ridding their countries of weapons of mass destruction.

Vincent J. Romano organized the Fellowship of Reconciliation's citizens inspection teams. He is a writer and activist living in Nyack, New York. 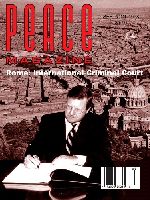 Search for other articles by Vincent J. Romero here