There's but one road slicing through the wooded highlands of Chiapas, twisting and climbing above ancient valleys, past steep hillsides planted with corn, between jagged peaks rising out of the perennial fog. Our mini-bus strains against the grade, the whining motor drowning out the scant conversation.

Our delegation arrived in Mexico six days after the massacre in Acteal of 45 men, women and children. While briefly newsworthy, this attack is only one event in an ongoing low-intensity war waged by paramilitary groups who are financed and fomented by the state government and members of the ruling party, the PRI.

While religious custom called for a memorial service nine days after the deaths, the political circumstances called for a demonstration beforehand.

We arrive in Polhó well before the start of the march but the road is already a parking lot jammed with vacant vans, buses and trucks abandoned by scores of passengers who now mingle with hundreds of villagers who arrived by foot. Leaving behind the cramped familiarity of our bus, we descend into the commotion, exchanging short-lived promises to stay together.

A large painted banner greets us as we exit the bus. "Welcome to the autonomous community. We share in the deep sorry for our brethren, fallen at the hands of aggressors." Next to the sign, a group of indigenas rest in the shade of a chipped cement structure the color of a June sky. Graffiti dominates the crumbling facade, declaring in broken Spanish, "zapatizta is your father, PRI is their father."

Beyond the building, a line of olive green jeeps and personnel carriers faces the growing crowd. A sandbagged nest protects a watchful soldier and his machine gun. Federal troops and black-clad state police mill about, chatting amongst themselves, hands never leaving their automatic weapons.

The marchers, defiant in the face of continuing violence, count on the restraint of these heavily-armed forces, nominally protecting us, yet known by all to collude with the paramilitaries. The random motion congeals into a directed flow. &iexcl;Vamos! We're going! People scurry about, gathering friends. A trinity of priests in flowing white robes leads the way. To one side, a man shoulders a large wooden cross; to the other, a woman with smoldering eyes clings to a chipped plaster statue of the Virgin Mary.

We begin up a long hill, a snaking mass of about one thousand, mostly indigenous people from the region. The men proceed wordlessly at a measured pace, broad-rimmed Panama hats casting shadows on their stoic faces. Clusters of pigtailed women and girls brighten the scene in white blouses with shocks of red embroidery and rainbow stripes. Knitted shawls wrap their shoulders or form pouches which hug young children to their backs. Many haul sacks of coffee, bags of grain, and bulky bundles as big as their torsos, their bare feet silently padding on the cold pavement.

A young man stumbles on some debris, drawing my attention. He rights himself and continues, drawn forward by the momentum of the march. In his hand is a white flower, its long stem wrapped in a scrawled page pleading for "Paz con Justicia". While calling for "peace with justice," his message evokes the name of the paramilitary organization "Paz y Justicia". The phrase "peace and justice" has been expropriated, excised from the local lexicon, the words twisted with irony: the peace and justice envisioned by the powerful offers neither to the peasants.

We continue our ascent, overflowing the winding two-lane highway, spilling out onto its rough shoulders. All around, photographers bound up roadside mounds, seeking ideal vantage points. They dart ahead to squat in the path of the procession, before, between, behind the passing priests, thrusting cameras in sullen faces, hijacking the moment, stealing the solemnity.

As we approach the crest, a canvas-covered truck groans and rumbles up the hill, parting the mourners. It stops by the priests. Rear panels flap open revealing two indigenous men, who disappear in the shadows. There's an announcement in Tzotzil. I think I hear someone say in Spanish, "We have something for you."

I strain high on my toes to see inside the dark interior. Terminator and Rambo images collide with grim reports of recent events. A glint of steel? An adrenal jolt shifts time into slo-mo. Find an escape route... there! No, over there! Muscles tense, ready to bolt at the first flash, the first crack! crack! One of the men steps forward, wielding only a large red brick. "With these we will rebuild the community," he says, lowering the first bricks to outstretched arms. A line forms, each person stepping forward to receive this symbol of rebirth like a surreal communion. Those newly blessed continue over the crest. The ubiquitous bricks, balanced from below at ear level, transform the mass into a moving wall.

I long to show my support, share the moment. How can I best participate? By carrying a brick, accompanying these shattered families for whom my peak moment in Chiapas is but a point along a gray continuum? By leaving my hands free to document their suffering? I opt for comfortable detachment, protected behind my lens, aware of the deep chasm separating our realities. I am an interloper, intruding on a deeply personal rite of remembrance. An outsider, a tourist, a voyeur, a safari hunter capturing sorrow like a trophy.

We have arrived at Acteal, but no homes are visible. No... más abajo. The front of the group trickles over the edge of the road. The human river funnels into a narrow stream, flows down the slick trail and forms a lake in the clearing. Under-foot, the rocks, branches, soil and leaves dissolve into a moist monochrome, a gluey glop that threatens to suck the shoes from my feet.

Across the clearing a crude frame of coarsely cut beams marks off the site of the memorial service. The large cross carried from Polhó is planted alongside the elder priest who offers mass in a mix of Spanish and Tzotzil. On the ground in front of him, dozens of candles in small glass jars form another cross. Beyond this, photographers and cameramen squat in the muck, snapping and filming insatiably.

A song is sung in Spanish, then another in Tzotzil. A priest leads a call and response with hundreds of voices rising in unison. The dark, ancient sounds of Mayan dialect lend a sacred timelessness to the prayer.

One by one, the mourners step forward to name family members lost in the massacre-four by this man, five by that woman-and to light candles in their honor.

A slight wisp of a girl, perhaps seven years old, steps forward. Intimidated at first, she finds support in the gentle face of the priest. The softness of her voice amplifies her words. She tells us that her parents and her older brother are dead. Strapped to the her tiny back is her two year old sister-the only other surviving member of her family. The faces of these children-one scarcely comprehending and the other mercifully oblivious-impale a thousand hearts.

I wander to the site of the communal grave. There are no tombstones, no individual markings, just a large scar of disturbed earth upon which mourners have laid wreaths and white carnations. Three young women-surely sisters for the strength of their resemblance-hunch over a makeshift altar of burning candles, offering a private prayer.

Nearby, a survivor recounts the massacre to some visitors. Gesturing up the hill, he tells us that the gunmen started shooting at the church from across the gully, forcing the worshipers to flee into a shower of bullets, racing in every direction. "Many tried to escape down the hill," he says, pointing to a tangle of trampled branches, "But some didn't make it." Half a dozen mismatched shoes cling to the hillside. A baby's shoe, once white, lies bronzed in muck.

Night has begun to fall. The members of our delegation find each other in the clearing by the grave. We retrace our steps back up toward our waiting bus. As we clear the crest and begin the descent to Polhó, a military convoy cruises past, heading towards Acteal.

What will become of these families when the delegations depart, when the journalists and photographers pack up their equipment and return to their comfortable homes? I now realize the value of our visit. We are interlopers, intruding on the internal affairs of a nation, outsiders inclined to convey inconvenient truths to the world. We are flesh-and-blood flak jackets, our presence shielding those upon whom we intrude, balancing the delicate equation ever-so-slightly in their favor. Richard Plevin lives in Berkeley, California and works on software.

gained control of large areas in predominantly Tamil-speaking regions. While the Tigers use surprise attacks and terrorist bombings as their main weapon, the state's Security Forces often respond with reprisal attacks on civilians. In a conflict where both government and guerrilla forces are responsible for human rights atrocities, honesty and integrity of information on human rights is not always visible.

The prospect of political settlement seems far off. Human rights violations today form the backbone of state military and guerrilla forces. If a ceasefire and a framework for negotiations is to be achieved, fundamental changes are necessary. First, the Devolution Proposals, a plan by the Sri Lankan government to grant limited autonomy to the Tamil population in the north and east, lacks a real commitment toward empowering minorities politically. The domination of the Sinhalese Buddhist state remains. However, despite its inadequacies, a political solution must be encouraged as the peaceful path to follow. In fact, progressive reform of the Proposals remains a viable alternative, so long as the LTTE and the government are ready to abandon their immovable positions in the ethnic conflict. Sadly, the recent ban on the Tigers by President Kumaratunga has technically shut the door for further negotiations.

Second, any resolution to the war, short of complete annihilation by one side or the other, must involve all parties to the conflict at every step of the way. A ceasefire cannot depend on immediate disarmament. This is simply unrealistic; neither the LTTE nor the government will agree to such conditions.

Third, the establishment as a whole will have to be radically changed. The military and administrative institutions of the state must be purged of their ingrained reliance on racism and suppression. Independent investigations into all human rights abuses must be implemented by commissions having the full support of the international community. These must bring perpetrators to justice and take preventive measures against further atrocities. Future generations of Tamils must have a political voice in an environment free of violence and discrimination. The LTTE must put down their guns, not necessarily in surrender, but in recognition that Tamils who do not support the Tigers also have a right to represent their own community.

Finally, as international citizens and as caring individuals, we must insist to the journalists and politicians of the Western world that we have an urgent need and right to know what is happening in Sri Lanka today and what has painfully been forgotten yesterday. Governments must be pressured to stop providing the Sri Lankan state with the means to wage war. Fundraising by the LTTE abroad and at home must be stopped, for only then will they end their murderous rampage. Peace activists cannot be caught blindly supporting one side of violence or the other. If Sri Lankans have the courage to face the forces of repression despite personal persecution, surely we can do our part. 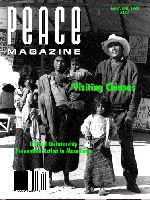 Search for other articles by Richard Plevin here