During the cold war, little serious consideration was given to economic systems beyond capitalism and socialism. Times have changed, and so have our options

THE TWO accepted economic systems are capitalism and socialism. Each has its serious drawbacks, as recently demonstrated. Their theories are quite attractive in their own ways, but, we are warned, "by their fruits you shall know them." "Actually-existing socialism" of the communist kind has ceased to exist almost everywhere, because the everyday practice has proved distasteful to most people. The same fate may soon befall "actually-existing capitalism," which is bringing suffering and deprivation to many people, both in developing and industrialized countries.

Seeing this, many people lose hope, and ask "where can we turn for alternatives?" Yet alternatives exist, in de-centralized local initiatives such as cooperatives, Grameen banks, and local currencies. However, one very complete and well-thought-out alternative economic system is Gandhian economics. This has been written out in detail by Indian economist Amritananda Das, as based on Mahatma Gandhi's thought. While Gandhi did not apply rigorous economic theory to give structure to his thought, he formulated very clearly the basic principles. Das in his book Foundations of Gandhian Economics added the economic theory, expressed in equations and the other paraphernalia, to make this into a complete alternative system.

Gandhi's basic advice was "don't rush into technologically oriented development; first make sure what impact it will

have on employment, and through this on the well-being of the poor people." This principle completely stands on its head the usual assumption of capitalist economics, namely that the primary aim is to maximize the efficiency of the production of goods, almost regardless of whether the goods produced are basic necessities for the poor or luxury goods for the rich. The basic principle of Stalinist economics was to maximize the production of capital goods, such as heavy machinery, so that future generations could enjoy a plenitude of consumer goods. Both capitalist and socialist economies were based on technology-intensive rather than labor-intensive production. Gandhian economics reverses this preference. (Incidentally, technology also tends to increase environmental damage.)

The basic aim of Gandhian economics is to provide full employment for the poor, really for all potential members of the work force, so that these workers can provide for their own necessities by their own efforts, in dignity, without depending on charity. Gandhi was not opposed to technology, but advocated a proper mix (depending on prevailing conditions) of technology-intensive and labor-intensive production. The economist's task should be to determine what the proper mix is; econometric calculations based on facts can help determine this. In short, the amount of available investible resources must keep pace with the population increase of employable workers. This is the basic principle, on which the economist must base his/her other recommendations, e.g. how much external trade the country should engage in.

Capitalist economics does not care about the fate of the unemployed, because they cannot buy the luxury goods being produced anyway. If not enough people buy the luxury goods, which could happen if too many are poor, leaders of capitalist businesses put on expensive and wasteful advertising campaigns, to convince people that the luxuries are really necessities. Many, especially in experienced young people, fall for this, and get themselves deeply into debt. This also applies to whole countries, which acquire debts so horrendous that they can never hope to repay them, and bankrupt themselves just keeping up with interest payments.

While capitalism leads to very skewed distribution of goods and services (some get too much and most get too little), and real-existing socialism tends to under-produce consumer goods because of the inefficiency of large-scale planning and the postponement of consumer goods production, Gandhian economics would strive for income and wealth equalization by providing productive meaningful work for every one, even if the full use of the latest industrial technology is provisionally postponed. After all, what is the benefit of being on the cutting edge of technology if it increases human misery?

Under Gandhian economics, fewer luxury goods would be produced, because the emphasis would be on producing enough necessities for everyone. This would simplify life styles, which could be of benefit in causing people to focus on the real values that produce happiness, such as family solidaritv devotion to the arts and sciences, and spiritual pursuits. Gandhi defined "happiness" as the ratio between want satisfaction and the number of wants. We can increase this ratio (and therefore happiness) either by increasing want satisfaction (as we are doing under capitalism) or by decreasing wants, i.e. living lives of voluntary simplicity.

Technology, like fire, is a good servant, but a poor master. Gandhi, like E.F. Schumacher ("Small Is Beautiful") later, advocated "economics as if people mattered." Why don't we give it a try?

Hanna Newcombe is a peace researcher living in Dundas, Ontario. 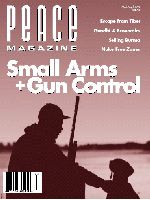