OUR MEMORIES ARE of a heroic Vietnamese people fighting for independence against French, then American, imperialism, trying to collectivize land (in the North) and build an egalitarian society in the midst of war. We remember the South Vietnamese revolutionaries, seeking Hanoi's help. They had been promised autonomy once the Americans were driven out

That was the dominant reality at that time, but now our images need updating. Vietnam's leaders have turned their attention from revolution to managing economic growth, but their undoubted skills in one realm are not necessarily transferable to the other. The expectations of the revolutionaries have not been realized; in fact, many of the evils of pre-revolutionary capitalist society are returning, despite continued Vietnamese Communist Party rule.

In 1975 when the Americans finally left and Hanoi's troops marched into Saigon, South Vietnamese wishes for autonomy were quickly forgotten and the South was integrated into a highly centralized state. Party policy decreed that southern farms also be collectivized (though it was never possible to fully implement this) and that factories, businesses and church schools be handed over to the state. At the same time public health and education were rapidly expanded - but above all, peace had returned. Yet only four years later Vietnamese troops were again being sent to the front -into Cambodia and to defend the border with China. In the meantime peace had not brought prosperity; only shared poverty. The economy survived primarily with Soviet aid. Corruption grew. Many Vietnamese - even patriots and revolutionaries - wondered what it had meant to "win" the war, and at such terrible human cost. (Only later, in a brief period of literary freedom in the late 1980s, were these feelings put in print.)

By the mid-1980s both domestic and international conditions conspired to force major changes. Agricultural production, which largely determined government revenues (derived overwhelmingly from state marketing) was dropping, and peasants were pressing forcefully for greater autonomy for farm families, whether in planting or in marketing. Gorbachev was also quietly indicating that massive Soviet aid could not continue, while providing a model for reform. The cost of the occupation of Cambodia was unsustainable, and the economy required a policy shift that would lead to a lifting of the American-led trade and investment embargo.

After some intense, but muted, conflict within the leadership, at the Sixth Communist Party Congress in 1986 a new policy of doi moi, or "renovation," was proclaimed. The dirty word "capitalism" was never uttered -- this was a "socialist market economy" -- but to the lay observer who saw long-term "contracts" on family farms which gradually became the equivalent to private ownership, the wooing of foreign capital, the blossoming of private Vietnamese entrepreneurs - first in small business, then in large - and the consequent enrichment of some and impoverishment of others, all looked very capitalistic indeed. Despite the term "renovation" this was a change nearly as great as that in the North in the 1950s or in the South in the '70s, but this time away from state control of the economy: some would call it "counter-revolution."

But the political fundamentals have not changed - yet. The Communist Party is still very much in control. In 1988 there were small signs of political liberalization, such as more non-Party candidates for the National Assembly, the opportunity; occasionally, for real debate in

that Assembly (though behind closed doors), and somewhat greater freedom for the press. But by late 1989, after the Tiananmen massacre, there was a tightening of Party control. The Vietnamese leadership was deathly afraid of a repeat of the Chinese experience. To be sure, most discouragements to religious worship and other traditional practices have been removed - the general secretary of the Party was televised this year paying his respects at a pagoda during the New Year celebration - but the only religious leaders who have steadfastly resisted Party control of their organization, the Buddhists of Hue (those who started the successful opposition to Ngo Dinh Diem in the 1960s) have ended up in jail or exiled to their home villages, despite some remarkable public protests by their followers earlier in 1997. Jail is also the fate for those outside the Party who advocate a multi-party system; high ranting Party members who have taken the same position have usually suffered only expulsion and unemployment.

Doi moi is thus economic liberalization without loosening Party dictatorship. In the short run it has been remarkably successful. Increasing personal incentives for productivity does provide a spurt, at least for a few years. In 1997 Vietnam - at around 8 percent - may have one of the highest economic growth rates in the world. This tells us nothing about the distribution of benefits, which, though unequal, is still not as bad as that in most other Asian countries. Most farmers have increased their incomes, and many in the middle class have raised their standard of living. Poor peasants and workers in the growing number of non-functioning state enterprises have suffered most. Not only have they lost livelihood, but government services as well. "Public education" k no longer free (teachers, too, must eat) and medical treatment is usually available only after small payments over the table, and much larger ones under. Nevertheless, economic growth has engendered among large segments of the population an acceptance of the legitimacy of the regime.

But how long can this last? Vietnam has not yet experienced a financial or economic crisis as intense as that of Thailand. But it has a weak banking structure with many bad loans; some major debtors have already failed to repay private foreign loans on time; the flow of foreign investment has diminished sharply over the year, while corruption and excessive bureaucratic controls have slowed domestic investment as well. So economic crisis may be on the horizon for Vietnam too. And already even those who have benefited from growth are increasingly discontented politically with massive corruption, which seems to grow proportionate to the GNP The Party is aware of the threat which corruption, sometimes at the highest levels, constitutes to it' but, in spite of increasing severity on some, seems unable to reverse the trend.

However, discontent, to have political consequences, must be fed with information. Vietnamese get precious little information through the press in Vietnam about what is happening locally. But the middle class, despite controls, has increasing exposure to foreign news; and rumor mills are working overtime. The government delayed until this year before allowing an invasion by the Internet, perhaps believing that it had now mastered a technological defense. But informed foreign observers doubt that the Ministry of the Interior can entirely prevent the entry by computer of "subversive" information. Even within the country, e-mail, soon to involve all universities, is generating a flow of communication too great to be censored.

On the positive side, the Party has recently made great efforts to rejuvenate its leadership, which could contribute to greater flexibility and openness. But the "conservatives" -Communist hard-liners on both economic and political questions who have opposed many of the reforms already undertaken, are still an impressive force - strong enough on some occasions to delay important decisions by months, even years. Whereas the reformers have frequently cited the Thai economy as a "model," the hard-liners may see the current Thai economic crisis as a vindication of their views. Yet any effort to reverse economic reforms already undertaken could lead to both economic and political turmoil. The loss of the major source of regime legitimacy, economic growth (driving out the imperialists is an accomplishment that is now slipping into history, and Marxism-Leninism is passé outside the Party elite and sometimes questioned even within it) would pose a dire threat to political stability. More beggars and more millionaires driving Mercedes would not be tolerated without an expanding economic pie. The effects of years of Party indoctrination about the virtues of egalitarianism have not entirely dissipated.

The Party, and the nation, are faced by a clutch of dilemmas. Should, as in China, millions be made unemployed for the sake of economic efficiency? Can billions of dong be drained monthly from the state treasury by grossly inefficient state firms, thus denying funding to health, education and social services? Can Vietnam's innate nationalism tolerate the growing role of multinational corporations and the concessions being made to them? Can the political domination of the North, despite the economic dominance of the South, survive an outburst of southern opposition sentiment, which is only inert as long as the economy grows rapidly?

Undergirding all these dilemmas is the long term one: can corrupt, authoritarian one-party rule survive growing international contacts, greater economic freedom for an expanding bourgeoisie, and the gradual disaffection of the intelligentsia in a society which is still affected by Confucian concepts of value and hierarchy? Yet that expanding bourgeoisie is the direct and intended consequence of present policy, and could provide essential backing for disaffected intellectuals.

Vietnam is a country dotted with spectacular natural beauty possessing a rich cultural heritage. UNESCO is helping to restore the old imperial palace in Hue so badly damaged in the 1968 Tet Offensive. The impressive, but crumbling French opera house in Hanoi was restored for the November 1998 Francophonie summit. But heritage and the environment are both threatened. Scholars and officials have tried to devise regulations to preserve the 16th century town of Hoi An from the ravages of rampant commercialism, but the outcome is in doubt. In Hanoi rules to protect the old city from high rise development have been breached by corrupt deals between Party officials and foreign developers, though Vietnamese architects and historians continue the preservation battle. The common use of the bicycle, which has made Hanoi until now the only walkable capital city in southeast Asia, is fast changing, displaced by the noisy, smoky motorbike. And five different foreign manufacturers are soon to begin making automobiles. So in a decade Vietnam's cities may duplicate the traffic gridlock of Thailand. It seems very hard for any society to learn from the mistakes of others.

Finally it must be added that the Vietnamese are a very friendly and forgiving people. While in the streets of Hanoi or Saigon a decade ago it was important for a Canadian to establish that he or she was not an American (or a Russian), today all Westerners are welcome, including French and American veterans of the Vietnam war. The wounds of the past are healing, even though the mistakes of other nations are being repeated. What is abundantly clear is that from the conflicts of the 1950s, '60s and '70s there were no "winners." It is only to be hoped that rich losers may help the poorer ones not only with capital, but with friendship, understanding, and compassion. Those few NGOs which have maintained their programs in Vietnam consistently over the last thirty years like the Quakers, the Mennonites and Fraternité Vietnam - adapting to tremendous changes in the meantime, are evidence of such sentiments. They and their Vietnamese cooperants are the only ones really "winning the peace." The Vietnamese nouveau riche may also regard themselves as winners, but for some, at least, their gains will not last.

David Wurfel is Senior Research Associate, Joint Centre for Asia Pacific Studies, University of Toronto/York University, and Professor Emeritus of Political Science, University of Windsor He has studied Vietnam for more than 40 years, making over 15 visits. He spent three months in early 1997 as visiting lecturer in Hanoi. 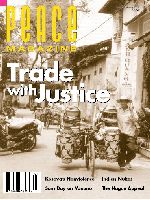