Voisey's Bay And The Innu

Formed in response to a request by the Innu for southern support in the face of an impending mining mega-project in northern Labrador, the Voisey's Bay - Innu Rights Coalition (VB-IRC) aims to develop a well-informed, critical understanding of the many dimensions of public interest that converge in this historically important development.

To this end, VB-IRC organized two public teach-ins, held in Toronto in September. In the first of these sessions, journalist Mick Lowe outlined the history of Inco (the parent company of Voisey's Bay Nickel Company).

Almost 100 years ago, in the Battle of Manila Bay, U.S. navy ships, armoured with a plucky new alloy of steel, introduced to the world of armaments the strategic importance of nickel. INCO, now the world's biggest nickel producer, was born out of the resulting nickel boom and has been a key player in the US military-industrial complex ever since, although recently the company has made efforts to greatly reduce its dependency on military markets.

History shows that INCO's appetite for profit has brought it many times into conflict with the Canadian public, and that it has always been pressure from outside the company that has forced INCO to make changes in the public interest: in 1916, as a result of national scandal and outcry, INCO agreed to refine its ore in Canada; in 1944 after community-wide resistance to union-busting and intimidation tactics, INCO accepted the unionization of its workforce; in the 1970's, following a long and acrimonious strike in which Canadian Business magazine humiliated the company for its "arrogance", INCO began to dramatically lower worker fatalities and improve working conditions; and in the 1980's, when public concerns about the contribution of sulfur dioxide to acid rain were high, INCO began to develop innovative technologies that have reduced the environmental impacts of its operations.

INCO has the means to develop the Voisey's Bay mine responsibly, at a pace that respects the Innu and Inuit(f.1), on a scale that reflects judicious use of the Earth's bounty, using technologies that protect both humans and the extra-human world. But it will have to be the concerted, collective efforts of outsiders that force the company's hand and ensure that it watch more than just the bottom line.

In the second teach-in, Professor Isobel Heathcote addressed the environmental impacts of sulfide ore mining. Currently at Voisey's Bay, INCO is proposing to meet local standards using the best available "economically feasible" technology. Considering the enormous value of this mine and the laxity of local environmental standards, such assurances are inadequate.

Of particular concern at Voisey's Bay are some possible impacts on water systems: the potential extraction of large volumes of water possibly resulting in lowered water table and altered surface water flow patterns; flow-related effects on sediments of rivers and lakes; and mine/mill effluent or discharge that could be toxic to fish and invertebrates due to copper, pH and ammonia, and additional concerns related to high suspended solids, high levels of metals, altered pH, organic contaminants - especially from solvents like benzene, toluene and xylene - phenolic compounds, oil and grease.

Moreover, while science can quantify the direction, frequency, and/or duration of these ecosystem impacts, there is no way to measure their significance. Science can yield some useful data on increased sediment load and toxicity in fish, but it can't put a number on the meaning of these changes for the Innu and Inuit. The significance of diet, self-reliance, fear, loss, and traditional cultural practice lie in the realm of values. It is this issue that is expected to spawn the greatest disagreement among parties involved in the environmental assessment.

The depth of public concern for aboriginal rights and environmental protection at Voisey's Bay suggest that innovative new technologies could and should be developed and tailored to the needs and conditions of this northern Labrador site. And given INCO's expertise and financial resources, as well as the scope, time-frame and value of the Voisey's Bay project, there is every reason to believe that this mega-project has the potential to set new standards for environmental and social responsibility.

f.1: The Innu nation and the Inuit have overlapping land claims in the Voisey's Bay region and have worked jointly on legal challenges to INCO's activities. 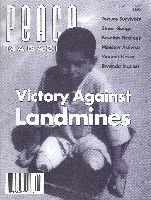 Search for other articles by Jennie Barron here