Peter Roger Buehl was sent to death row after being unjustly convicted of a murder he did not commit. In 1992 his attorney uncovered extensive evidence of prosecutional misconduct and perjury. The state courts, however, have been unwilling to overturn the conviction and Roger remains on death row. His family and friends have exhausted their available resources in this lengthy battle. Please help by sending donations to: Death Penalty Defense Fund, c/o Schuylkill Friends Meeting, 37 North Whitehorse Rd., Phoenixville, PA 19460

The decision last month to expand NATO membership to include Poland, Hungary, and the Czech Republic has created fierce competition among American, Swis,. and French defense firms for prized military contracts.

With NATO membership conditional upon a candidate country's ability to "improve" its armed forces, countries like Romania and Slovenia, strong contenders for membership but restricted by finances, appear to be the losers in this new Europe that NATO claims will be "undivided, democratic and at peace."

In 1986,after almost 40 years of coverups,the U.S. government released 19,000 pages of previously classified documents which revealed that the Hanford Engineer Works was responsible for the release of significant amounts of radioactive materials into the atmoshere and the adjacent Columbia River.

Between 1944 and 1966, the eight reactors, a source of plutonium production for atomic weapons, discharged billions of gallons of liquids and billions of cubic meters of gases containing plutonium and other radioactive contaminants into the Columbia River, and the soil and air of the Columbia Basin.

Although detrimental effects were noticed as early as 1948, all reports critical of the facilities remained classified. By the summer of 1987, the cost of cleaning up Hanford was estimated to be $48.5 billion. The Technical Steering Panel of the government-sponsored Hanford Environmental Dose Reconstruction Project released the following statistics in July 1990: Of the 270,000 people living in the affected area, most received low doses of radiation from iodine, but about 13,500 received a total dose some 1,300 times the annual amount of airborne radiation considered safe for civilians by the Department of Energy. Approximately 1,200 children received doses far in excess of this number.

A study on the fallout from atomic bomb tests in the Nevada desert during the 1950s was demanded by Congress in 1982 and is scheduled for release this September.

The study, begun in 1983, looks as the dispersal of radioactive iodine 131 from nuclear weapons tests in Nevada between 1951 and 1958. The material was carried by prevailing winds and deposited in much of the United States and parts of Canada.

The study finds that some counties where residents had most exposure to the radioactive isotope iodine 131 are in the farm belt, in Rocky Mountain states and New York. Officials with the National Cancer Institute, which is preparing the study, said it shows that people in the most affected counties absorbed amounts of iodine 131 comparable to people in Nevada, Utah, and Arizona who lived near the test site.

"The study indicates that the entire population at this time received some level of exposure," said Bruce Wachholz, who led the study.

The Military Production Network and Physicians for Social Responsibility have asked Cabinet secretaries to release the study on thegrounds that the government has covered up results of 1950s domestic nuclear tests in the past.

Investigation Into The Effects Of Depleted Uranium

The Depleted Uranium Education Project demands that a complete and independent investigation into the health effects of the use of depleted uranium weapons during the Persian Gulf War begin immediately.

The recent General Accounting Office (GAO) report is critical of the Pres- idential Advisory Committee on Veterans' Illnesses and the Pentagon for their investigation of Gulf War Syndrome, yet there continues to be no mention of the widespread use of highly toxic and radioactive depleted uranium weapons and their health effects on Gulf veterans.

Prior GAO reports state the health risks resulting from the use of DU weapons. "DU oxide dust, which is formed as a result of the DU being subjected to intense heat that results from the round's penetration of the vehicle, poses both a radioactive and a toxicity risk. Personnel working on or inside the contaminated vehicles can come into contact with the DU dust either by inhaling it or by ingesting it." Source: Depleted Uranium Education Project 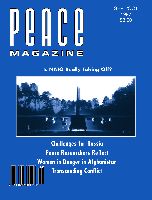