Islands of Civility and Resistance

I expected to find a high degree of fatalism at the "Lessons of Yugoslavia" conference. The disintegration of the old federation, the war which followed, and the end of Bosnia as a multi-ethnic state can all be seen as pre-determined outcomes, with a grim historical determinism linking one catastrophic event to the next. But this was not the whole story of the Yugoslav crisis. There were also experiments, all brave, some foolish, to stop the war-making and bring the conflict back to the world of negotiation and compromise and co-existence. In a sense, all of these initiatives failed: the war dragged on for five years in Croatia and Bosnia, and the big losers in both these states have been local minorities, most of whom have fled as refugees and cannot come back. In Kosovo, the majority Albanian population has no political rights. And in Serbia, the struggle to oust Slobodan Milosevic is still not over. But an equally important objective was to keep civil society alive, to keep people in control of at least some aspect of their own lives. Some of these stories were told at the conference, offering hope for postwar civil society in the region.

Sonja Licht of Belgrade's Open Society Foundation refers to "islands of civility and resistance." When the war began, the inhabitants of these islands "organized inter-ethnic dialogues, advocated nonviolence, and raised their voices against intolerance and the politics of hatred. When the war broke out they organized all kinds of actions, supported draft resisters, and faced much more difficult times than the dissidents of the communist era, since they often had to oppose not merely the regime, but practically their whole nation as well." The islands took many different forms: the radio stations Radio Zid in Sarajevo and B92 in Belgrade, the satirical newspaper Feral Tribune in Split, the Croatian Helsinki Committee, the Tuzla Civic Forum, Women in Black in Belgrade and other Serbian cities, and the Centre for Cultural Decontamination in Belgrade. Licht noted the gap between international rhetoric about supporting independent media and civic groups and the actual help offered.

An example of this ambivalence is Radio B-92, which opposed Serbia's involvement in the wars in Croatia and Bosnia. Although there were small groups, including one in Toronto, supporting the station and attempting to give it supplies and money, the first significant aid was received in early 1997, when Voice of America began rebroadcasting its signal after the Milosevic regime had tried to take it off the air.

Issues of support were not fully explored at the conference. When is it feasible for a civil society group to accept resources, or even moral support, from a foreign institution without compromising its position? The crucial factors appear to be the weakness of the regime the group is opposing and the clear and demonstrable lack of strings attached to any material aid.

As Bosnian Serb troops began to close in on Srebrenica, Major David Last called Metta Spencer and asked for advice on how he, as a U.N. peacekeeping officer, could offer nonviolent protection of civilians. She phoned a number of nonviolent intervention and civil defence specialists around the world, and their response was heartening-though many prefaced their remarks with "do you really hope to do anything in 24 hours?" In fact, there was little anyone could do at that stage.

Last is now an associate professor at the Lester B. Pearson Canadian International Peacekeeping Training Centre, where he has continued to explore ways of integrating nonviolent civilian protection techniques into U.N.-style, military-based, peacekeeping interventions. Last cited people's individual responses to violence as a building block for organized resistance to military action, though he saw limitations. Externals, such as heavy weapons and rapidly moving armies, are "weather factors" about which nothing can be done. When you are faced with really bad weather, all you can do is minimize the damage by handing out umbrellas.

The most appropriate techniques for protecting civilians are those which involve civilians, Last noted. These include forming nonviolent defence councils; keeping solidarity among generations and between the sexes; getting unarmed military observers working alongside civilians trained in nonviolent resistance; sending in human rights monitors; ensuring a permanent international media presence; and preventing physical separation and resisting attempts to move civilians. He also cautions that U.N. soldiers should have good role models if they are expected to resist nonviolently without training, that it is dangerous to mix nonviolence and violence, and that soldiers can be dissuaded from brutality by dramatic demonstrations of courage.

Last observed that in situations of genocide, nonviolence is not an applicable strategy. This remark sparked some debate. Nonviolence is at its most effective in preventing the events which lead to genocidal crimes, not in physically stopping the genocide, as several of the pacifists sending advice to Last during the Srebrenica crisis pointed out. Last's view is that perpetrators of genocide have to be targeted before they become perpetrators, for example, through better military training.

There is not a single conflict region without pockets of peace, Jan Øberg of the Swedish-based Transnational Peace Foundation noted. In the Serb-Croat war, this area was Western Slavonia, where life went on as normally as possible on both sides of the front line. "Does civil society get recognition, or is it considered not to exist?" Øberg asked. The organs of civil society, such as local town councils and political parties in Western Slavonia, the central Bosnian city of Tuzla, or among the Albanian population in Kosovo, are potent forces for conflict avoidance and even for intervention. Konstanty Gebert described how the Tuzla citizen's council helped prevent a pogrom against the town's Serb population, when refugees from Srebrenica arrived in what was still a proudly multi-ethnic town. There were many smaller acts of heroism in face of hatred or even direct fire.

Øberg saw various obstacles to successful intervention from outside: the international community was still using ideas from the Cold War; soldiers and diplomats were used in jobs best done by professional mediators; the human dimension of the conflict was very easily lost; women were not involved in the official peacemaking process; and the use of violence can only regulate a conflict, not solve it. Diplomats were trained not to solve the problems of the Cold War. These were "theatre conflicts," designed to instill discipline in, and among, the states within each military alliance. To resolve them would have thrown the whole system into jeopardy.

Dorie Wilsnack gave a review of attempts by the international peace movement to intervene in the conflict, noting that the most successful interventions have been small-scale, locally based, and responsive: that is, offering resources which local groups have specifically identified or requested. She contrasted efforts to bring large numbers of people into the war zone, like the Italian-led Mir Sada action in 1992, with more modest projects which may have made a significant difference locally.

Wilsnack spent three months in Belgrade in 1996 as an adviser to the Balkan Peace Team, an international project that supports local peace and human rights activists by creating safer conditions for their work. Nonviolent accompaniment, a form of action refined by Peace Brigades International (which escorts and monitors actions by civil-society activists in Latin America, Sri Lanka, and First Nations groups in North America) is the starting point for the BPT's work, but the teams have taken this work a step further by offering more varied forms of support.

Balkan Peace Team projects were established in Zagreb in 1993 and the Kosovo capital, Prishtine, in 1994. The Zagreb team expanded to include an office in Split, on the Dalmatian coast, while the Prishtine project was forced to relocate to Belgrade because of police harassment. It still focuses on Kosovo issues, traveling to the formerly autonomous province for 10 days of every month, and working to facilitate dialogue between the majority Albanian and minority Serb communities. Because this sort of dialogue is still unpopular in both communities, much of the team's work has been indirect: supporting Albanian women's and youth groups which are independent of traditional political parties, and assisting recently-arrived Serb refugees from Croatia. The Croatian teams, now in Split and Karlovac, largely concentrate on human rights support work, including accompaniment, maintaining a presence at evictions, and helping with international press liaison for local human rights groups.

The town of Pakrac lies on the 1991-95 front line between Croatia and the Serbian militia-controlled lands of Western Slavonia. The Pakrac Reconstruction Project, an initiative to rebuild homes destroyed in the fighting around this divided town, was started by anti-war activists in Zagreb. Later, the Belgrade Centre for Anti-War Action helped set up a parallel project on the Serbian side of Pakrac. Over a period of three years, international volunteers-the only people, aside from U.N. personnel, allowed to cross the front line-were able to keep the two parts of the town in contact with one another.

After Croatia's spring 1995 offensive in Western Slavonia, the south side of town changed hands again, and its mainly Serbian population found themselves under Croatian rule. The Pakrac Reconstruction Project was gradually wound down. Compared to other towns in Western Slavonia, the Serbs of Pakrac have suffered less harassment and pressure to leave, thanks largely to the Pakrac Project's role in keeping communication open during the three years of division. Rebuilding houses has also helped to rebuild community values; the Pakrac model has since been taken up in the central Bosnian town of Gornji Vakuf and elsewhere in the region.

Ken Simons is an associate editor of Peace Magazine. 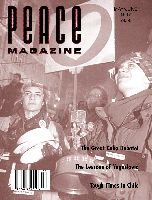