The house that made Pugwash famous-the Thinker's Lodge where 40 years ago nuclear scientists from 13 countries gathered to plan actions for averting nuclear war-was partially destroyed by fire on Sunday, August 2, 1996. Fire officials determined that an electrical surge was the cause.

Thanks to the efforts of volunteer fire brigades and local villagers, not all was lost. Most of its contents were removed even as the Lodge burned. Children helped carry books from the unique library down to the dining hall, the converted lobster factory by the shore.

In 1929 Cyrus Eaton gave the house and surrounding land to the village of Pugwash. Almost 70 years later, the Pugwash Park Commission agreed to restore the Lodge. Its integrity as a historical property will be fully honored and maintained with some improvements. Some Pugwashites who have slept in the Lodge may recall how their minds expanded during the day, but their bodies contracted at night. The uncomfortably short beds in the Lodge are being replaced or lengthened.

The Pugwash movement, conceived in England in 1956 was born in the Thinker's Lodge the following year. In 1995, Professor Joseph Rotblat and the Pugwash movement received the Nobel Peace Prize. Because of this honor, the Historic Sites and Monuments Board of Canada is considering er-ecting a marker at the Lodge.

This coming July, the Council of the Pugwash Conference on Science and World Affairs, chaired by its president Joseph Rotblat, will convene at Thinker's Lodge. The conference will double as both a 40th anniversary and an official re-opening of the restored Lodge.

Two members of the Christian Peacemaker Teams pleaded for the lives of Iraqi children during the confirmation hearing of Madeleine Albright before the Senate Foreign Relations Commit-tee on Wednesday, January 8, by begging for an end to the United Nations sanctions against Iraq which have led to the deaths of more than 500,000 children in the six years since the Gulf War.

As former U.S. ambassador to the United Nations, Albright consistently voted to maintain the sanctions against the Iraqi people. In a recent interview, 60 Minutes asked Albright if the deaths of the children was a price worth paying. "Yes," she replied. "It is a difficult decision to make, but we think the price is worth it." Madeleine Albright subsequently swept through the confirmation process to become the first female Secretary of State.

Bell Helicopter, based in Mirabel, Quebec, signed a contract with the ethically dubious Croatian military on October 3, 1996 to provide them with ten 206B-3 Jet Rangers. The helicopters, intended for use as training craft in the Croatian Air Force, were acquired at an estimated price of U.S. $15 million each. Bell Helicopter, in a related press release, thanked the Canadian government for sponsoring trade missions that make foreign contacts, such as this one with Croatia.

Eleven members of Christian Peacemaker Teams (CPT) were arrested on January 19 as they celebrated Martin Luther King day by symbolically shutting down the U.S. Navy's Project ELF (extremely low frequency) facility. This relic of the Cold War uses radio waves to signal the Navy's 16 Trident submarines to surface in preparation for a nuclear first strike.

An open-air "people's court" attended by 70-odd activists found the facility guilty of crimes against humanity and the environment, after which 11 CPTers wired closure notices to the fence and climbed inside the facility with more signs. The protesters were arrested for trespassing, fined $264.50 and released. They did not pay the fine.

Russia and the arms trade

1995 brought Russia over $3 billion from the sale of arms and contracts for an additional $7 billion, making it the world's second largest exporter. This is a huge increase over 1994, when Russian arms exports made up a mere four percent of the world's total. These rising exports are taking place against a declining demand for weapons. Total world sales fell from $46.5 billion in 1987 to $23 billion in 1995.

When the republic of Cyprus acquired Russian SAM (surface to air) systems, Turkey appealed to its NATO allies to denounce the perceived threat.The U.S. did so, eager to defame its trade competitor.

The U.S. was the largest exporter of arms in 1995, France was third and Great Britain was, with a considerable lag, fourth.

An Open Letter To President Clinton

Today, 27 January 1997, marks the 46th anniversary of the first nuclear test carried out at the Nevada test range. It also marks the first anniversary of the last test by France in her Pacific test range. France has closed her test range; the Nevada test range remains open. It is soon to be used for a series of subcritical nuclear weapons related tests. We understand that the first of these will be carried out on 4 February 1997, as part of the Science Based Stockpile Stewardship program.

Mr. President, the Canadian veterans organization that I represent is very much concerned about this quiet continuation of nuclear weapons maintenance and development under the SBSS program. These tests in particular, and the program in general, clearly subvert the intent of the Comprehensive Test Ban Treaty, signed by you on 24 September 1996. Where is America heading?

It is 11 years since Mikhail Gorbachev, General Secretary of the Central Commit-tee of the Soviet Union, announced on 15 January 1986, "a step-by-step consistent process for ridding the earth of nuclear weapons before the end of this century." His great vision, which was backed up by actions, did not succeed. Across the bridge to the 21st century we will be carrying with us a vast and deadly baggage of nuclear weapons.

If you think that America can retain these weapons and deny them to other nations not in the "nuclear club," are you not making the same mistake that President Truman made in 1945? He believed that the American monopoly of nuclear weapons was permanent; in fact it lasted only four years. Your subcritical tests may easily trigger a new, furtive nuclear arms race, spreading far more widely, and being even less under control than the last. Is this your vision for the future?

A different vision is possible. The immense might and prestige of the United States could be turned toward a strong, balanced and deliberate program aimed at ridding the earth of these foul weapons. Such a program will only have meaning if, like any good contract, it has a completion date.

Mr. President, you have a historic opportunity to launch such a program. Go to Nevada, go to the nuclear test site and announce to the world that it is closed forever.

When the Cold War passed into history in 1989, along with it went the general fear of the possibility of nuclear war. But though the time to midnight has been set back somewhat over the past eight years, we should not grow less vigilant and allow the ever-present nuclear threat to drift into obscurity.

A recently published booklet, Canada and Nuclear Weapons: Questions and Answers, which Beverley Delong prepared at the behest of the Defence Research and Educational Centre, is a useful primer on the current state of nuclear affairs.

It charts such diverse topics as the number of nuclear warheads known to exist; the effects of a nuclear war; nuclear accidents that have gone largely unreported; Canada's hidden and dubious role in the nuclear industry; present attempts to eradicate the nuclear threat; and possible alternatives for defence. Delong's work provides a quick, 50-page reference useful for settling debates.

The study is an eye-opener for those who rely on the mainstream media for their information, and for students seeking an introduction to nuclear weapons' issues. 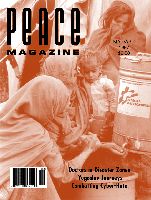 Search for other articles by David Morgan here