Vegetarianism is a peace issue

I am at odds with the "Meateaters for Peace?" author (Our Readers Write, Nov/Dec 1996). Like Zagreus, I too have been a vegetarian for many years, but I believe that vegetarianism is very much a "peace issue" and very much a social justice issue. It is also an issue which ultimately has an immense impact on world hunger, the environment, health, and, of course, the animals.

Our killing of animals is founded on the premise of might makes right. The fact that we can slaughter and are selfish enough to do so is not justification for killing animals, human or otherwise. As long as we continue to kill, how can there be peace? There will be no justice, no peace, while we willingly destroy billions of living, breathing, feeling animals.

In my article in the May/June 1996 Peace Magazine ("U.S. Nuclear Policy from Ron to Bill"), I referred to General Lee Butler, former Commander-in-Chief of the U.S. Strategic Air Force, as "the ultimate unregenerate warrior." This was in the context of the nuclear war-fighting strategies of the U.S., for which he was largely responsible, being Commander for Targeting and Planning. These strategies of the U.S. were a perfect example of (what was referred to in) the World Court judgment, identifying them as illegal in international law.

At the time of writing the article, I was unaware that General Butler was a member of the Canberra Commission and had totally repudiated his former sanctioning of U.S. nuclear military policies. A remarkable statement by General Butler at the April 1996 meeting of the National Academy of Sciences was that he would have carried out an order by his President to destroy the Soviet Union, had it been issued. But the heart of his recantation was the following part of his speech to that meeting (quoted from Alan Cranston's "Even the Generals Agree," p. 4 of the Nov/Dec issue of The Bulletin of the Atomic Scientists):

A world free of the threat of nuclear weapons is necessarily a world devoid of nuclear weapons … I have investigated a dismaying array of accidents and incidents involving strategic weapons and forces … Nuclear weapons pose an intolerable threat to humanity and to our habitat … Others subscribe to Churchill's assertion 'Peace is the sturdy child of terror.' For me, such a peace is a wretched offspring, a peace that condemns us to live under a dark cloud of perpetual anxiety, a peace that codifies mankind's most murderous instincts … The beast must be chained, its soul expunged, its lair laid waste.

This issue is not unlike that made in the judgment at Nuremberg. In fact, General Butler was in a better position than the Nazi generals who were found guilty of international crimes. He had the option to resign without fear of severe punishment. Nevertheless, we can be grateful that General Butler now has totally repudiated U.S. nuclear military policy.

Today conscientious objectors (COs) are not drafted in Canada, and there is a growing international movement to support CO status all over the world. But our money is conscripted to make napalm and bombs. We fight wars by proxy. Canada's tax laws force us to violate either the Income Tax Act or our conscience.

Svend Robinson, the MP from Burnaby, is sponsoring a private members' bill to allow taxpayers to declare themselves as conscientious objectors and to request that their military taxes, currently 7% of federal taxes, be spent on any other peaceful purpose on which the government currently spends money. The bill fulfills the requirements set out by the finance minister - that it not interfere with the government's prerogative to formulate public policy. 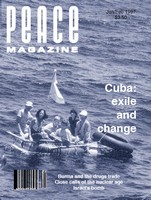