Community action relies upon the ability to give voice to genuine concerns. Four factors underlie local community concern regarding nuclear weapons development. They are: the dangers to physical and psychological health, the anger at secrecy and concealment about the health and environmental consequences of this work, the willingness of people to relate their local concerns to the broader issue of converting the nuclear weapons establishment, and the power of coalitions.

One illustration will help to clarify the link between the global issue of nuclear weapons development and local efforts. The project uses both local and global coalitions to act simultaneously upon what is both a local and a global problem. Tri-Valley Citizens Against a Radioactive Environment (Tri-Valley CAREs) seeks to transform the Lawrence Livermore National Laboratory (LLNL) from its mission of designing and testing nuclear weapons to peacetime goals.

The nuclear weapons complex has 18 facilities across the United States. The brain centres of this vast complex for the design and development of all new nuclear weapons in the U.S. arsenal are located in two Department of Energy Laboratories in Los Alamos and Livermore, technically under the management of the University of California. The long history of secrecy in nuclear weapons has permitted the complex to deal with some of the most hazardous materials known without oversight or review. All 18 sites of the complex have a history of concealing the extremely toxic consequences of their work to the health and the ecology of their surrounding communities. The Livermore facility has been a powerful protagonist for continuous development of new nuclear weapons, an effort supported by the largest corporate contractors.

Tri-Valley CAREs is taking on this Goliath. The group's concerns begin with risks to health - Livermore employees had a fourfold increase in two types of malignant cancer - and the local ecology - well water contamination has occurred and high levels of tritium in the soil have contaminated local grapes. For years, combined low level radioactive and toxic chemical wastes were incinerated into the air.

The group's concerns are shared outside their community. The LLNL's billion dollar annual budget is a centrepiece for the continuation of a vast nuclear weapons program that continues to create dangers to health while preventing a redirection of resources to the needs of a peacetime society. Its elite advocates have successfully precluded an implementation of the provision of the Nuclear Non-Proliferation Treaty that calls upon the nuclear powers to progress toward nuclear disarmament, a fact that is reflected in the unwillingness of other nations to relinquish their nuclear aspirations.

The concerned citizens' group first met in the apartment of its founding member, Marylia Kelley. Gradually they learned of the actions available to local citizens. By talking to their neighbors, by canvassing door to door, passing out leaflets and holding meetings, they found sources of inside information about violations of health and safety standards that the lab was committing. The group also became familiar with the complex legal procedures required for verification of environmental impacts. They called upon the State Department of Health, the Environmental Protection Agency and the Department of Energy (DoE ) to abide by their own statutes regarding public safety and environmental policy. The group has also joined with two important coalitions. The local Livermore Environment and Peace Alliance is a coalition in which individuals representing approximately 20 local Bay Area peace and environmental groups exchange information and prepare for coordinated activity at the next environmental impact hearing, DoE stakeholders' meeting, University of California Regents' meeting, congressional visit, or press conference. Among the local groups is the Western States Legal Founda-tion which spearheaded a major lawsuit against the University of California on behalf of Tri-Valley CAREs and the Southern Califor-nia Federation of Scientists.

Members of Tri-Valley CAREs have gradually mastered what Kelley calls the alphabet soup of abbreviated names of laws and agencies; of weapons technology components; of radiation effects; and of weapons policies, legislation, and treaties. Certain alliance members such as Physicians for Social Responsibility and the Association of Radiation Survivors have made special contributions but the leaders have courted and welcomed the participation of many groups. It is common, therefore, that during a public hearing on environmental impacts, more than an entire day of 10-minute time slots will be completely filled by citizens telling the DoE what is wrong with its technical, two volume report for which it had just paid $11 million. The critics will include doctors, nurses, lawyers, and psychologists, as well as scientists and engineers and some former or even present employees of the lab. They will include clergy, women's groups, environmental groups, University of California faculty, and sometimes children. The critical message will be both technical and personal, scientific and ethical.

Despite the mandate that public concerns must be addressed, the coalition does not expect its views to be taken seriously by the DoE. Typically, DoE officials avoid these meetings and send contracted personnel to run the show for them. In fact, the directives of each hearing are typically constructed so as to rule out from consideration any testimony relevant to whether the lab should continue to develop nuclear weapons. For Tri-Valley CAREs the hearing is an event paid for by the DoE; however, it provides an opportunity for public solidarity, media attention, and for placing into the record information that may be useful in the next legal challenge.

The group is also part of The Military Production Network, a national coalition coordinating activities at each weapons site and providing policy information. In addition, Tri-Valley and the Bay Area groups are part of an international network of nuclear weapons survivors stretching from Kazakhstan to islands of the South Pacific, and includes veterans' groups and downwinders from Utah and Nevada. It is clearly an example of "not in anyone's backyard."

In the 11 years since the inception of Tri-Valley CAREs, the Livermore Lab has had major projects delayed or canceled. It has more safety monitoring than before and has given up incineration of radioactive wastes. It has also developed a major effort to publicize its cleanup and non-military activities, and its Cold Warrior director has been fired. Most recently the group has been distributing information to show how the proposed National Ignition Facility would be a fig leaf cover to protect nuclear weapons research, at increased costs, in a test ban environment.

The lab's military functions - and their inherent dangers - are deeply entrenched in the institutions of the global economy. It has, however, found a grassroots protagonist clearly able to think globally and act locally. If the coalition succeeds it will be against the military force that insures global inequality, against the elite privileges of secrecy, and against the allocation of resources away from local human needs and into global destructive purposes. Increasingly, grassroots efforts are constrained because the local problems they address cannot be met with local resources but are by-products of global forces. Tri- Valley CAREs and its allies offer a model for organizing at a time when large-scale changes may be necessary for the survival of local communities.

Marc Pilisuk is a professor emeritus at the University of California and a faculty member at Saybrook Graduate School in San Francisco. He teaches psychology and human sciences that specialize in peace and conflict resolution studies. He is on the steering committee of Psychologists for Social Responsibility and president of the Division of Peace Psychology of the American Psychological Association. 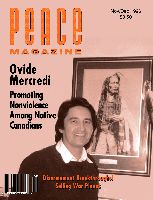 Search for other articles by Marc Pilisuk here