On the Road with Roche

Douglas Roche is on a cross-Canada tour, asking city councils to sign a resolution against nuclear weapons. Interview by Shirley Farlinger

SHIRLEY FARLINGER: You have undertaken a speaking tour to 19 cities across Canada, visiting every province. Is this a crucial time for such a tour?

DOUGLAS ROCHE: The crucial moment was the recognition that if the Non-Proliferation Treaty (now with an indefinite extension) is not upheld by the nuclear powers it will unravel and we will see the horizontal spread of nuclear weapons. India and Pakistan are the centrepiece of that concern. India doesn't want to sign the Comprehensive Test Ban Treaty because it says the treaty merely stops testing and doesn't require the nuclear states to give up their weapons. However since the NPT has quinquennial reviews there is an opening for all nations, especially those concerned, such as Canada. It's an opportunity for us to encourage the Canadian government to go into the prepcoms [preparatory committees] determined to make progress and keep moving on Article 6 of the NPT. It's a question of a time-bound program for disarmament and the need for some form of measurable progress.

FARLINGER: I recall that Article 6 of the NPT pledged the signatories to pursue general and complete disarmament under effective international controls. Even the nuclear states signed it. When the NPT was extended indefinitely in 1995 it was on condition of a set of Principles and Objectives which included the agreement on a Comprehensive Test Ban Treaty by 1996, a ban on the production of fissile materials for weapons, support for nuclear-free zones and the eventual elimination of nuclear weapons.

ROCHE: I want to see Canada play a role with other like-minded countries on the nuclear issue and I want informed Canadians to manifest their concern so the government is aware there's a number of knowledgeable Canadians watching Canada's performance. So I'm speaking not to the public but to roundtables organized at the local level to bring people in opinion-forming areas: peace, religion, academics, business - a cross-section in each community. I'll be discussing nuclear weapons in that setting. I will report to the government on the results of the discussions and I will encourage others to make their views known to the government.

Many people think that nuclear weapons have gone away (there are still 36,000) but the failure of nuclear states to live up to Article 6 creates a new kind of danger manifest in the horizontal spread of the weapons.

FARLINGER: You have always kept people informed about world affairs. What is happening that you consider encouraging right now?

ROCHE: There are three occurrences giving us a new focal point. The first is the Comprehensive Test Ban Treaty, which I hope will be signed this year, the second is the Canberra Commission, and the third is the World Court advisory opinion on the question of nuclear weapons. Each is a major event and brings the nuclear issue back to centre stage. It's folly to think that nuclear weapons are no longer important; they're at the centre of foreign relations.

FARLINGER: We've been celebrating the opinion of the World Court on the illegality of the use or threat of use of nuclear weapons. It wasn't as clear as we hoped. What do you think?

ROCHE: It is the highest-level legal push ever given to governments to get on with nuclear disarmament. One thing the media seem to have missed is that the Court said not only that there must be negotiations, but there must be a swift conclusion to them. Canada will have to choose between pressing for a time-bound nuclear disarmament convention which a majority of nations want, or supporting U.S. insistence on maintaining nuclear weapons for the foreseeable future. Foreign Minister Axworthy has called for a national debate on the future of nuclear weapons. The 30,000 Canadians who signed the World Court Project's Declaration of Conscience have already spoken.

FARLINGER: What do you think of the grassroots Abolition 2000 Campaign to get an agreement in place by the year 2000 on phasing out all nuclear weapons?

ROCHE: I like it. It's got a focal point - asking for a formula for abolition by 2000. I'll be promoting it in my tour.

FARLINGER: You chaired the Fiftieth Anniversary of the United Nations Committee in Canada when there were so many events across the country to celebrate. Yet the U.N. itself seems to be in financial difficulty.

ROCHE: Well, it is. The failure of the U.S. Congress to approve the $1.3 billion in U.S. arrears is a staggering problem for the U.N. And their rejection of the second term for Boutros Boutros Ghali is a sop to the right wing. If they get a new leader that the West backs, then Clinton can say to Congress, "We're supporting the new leader so release the U.N. funds."

FARLINGER: Who do you think that new leader might be?

ROCHE: Maurice Strong will likely get the backing from the West. However, there's a big drive for a woman. Mrs. [Sadako] Ogata from Japan, now head of UNHCR, and Mary Robinson, President of Ireland, are in a good position. It's never been a North American.

FARLINGER: What do you think about moving the U.N. to Canada?

ROCHE: The U.S. is a very powerful country whether you like it or not. It's outrageous that they're crippling the U.N. for $1 billion (total U.N. budget is $10 billion) given that they spent $260 billion last year on the military.

FARLINGER: I know your work comes out of a strong faith base. How does faith fit in?

ROCHE: I've learned in 40 years of traveling the world [that] these problems are essentially ethical. How we treat each other on this planet, the environment, human rights, global security all require a global consciousness. There has to be a reason to try to move human society forward to a higher level of life. I feel and sense that progress is part of God's plan and we share in it and have a responsibility. It's the technical age. We see the unity of the planet and how it corresponds to relationships we have. The human rights we all possess are not divisible. I don't have the right to go and bomb someone else out of hatred.

We are seeing a maturation of society. The codification of human rights was a milestone. We see a recognition of the human rights of each person that was never obtained before. For me it's a moral issue to move civilization to higher levels - it provides a basis of hope. I prefer to motivate people to hope. Doom and gloom and fear are not good motivators. Encourage others to move forward; that's part of God's plan.

FARLINGER: Your books also reveal your strong ethical basis. How many books have you written ?

ROCHE: Fourteen, the latest being An Unacceptable Risk: Nuclear Weapons in a Volatile World and Safe Passage into the Twenty-first Century, which I did with Robert Muller, friend and Chancellor Emeritus of the Peace University in Costa Rica.

FARLINGER: What do you think is the best way to work on these issues?

ROCHE: There's a variety of ways for me: speaking, contacting community organizations, writing, lecturing. And traveling. The combination of the World Court decision, the CTBT and the Canberra Commission give a solid basis for my tour.

Shirley Farlinger is a Toronto writer. 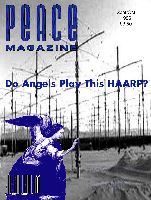