A Just and Sustainable World

From the President of Science for Peace

Our letterhead reads: "Science for Peace toward a just and sustainable world." What do the words "toward a just and sustainable world" imply concerning the struggle against preparations for nuclear war and for a scholarly examination of necrophilic technologies? We recognize that these concerns no longer seem as politically cogent as before. However, we cannot declare victory and leave the stage even if, as I suppose, nuclear-armed submarine and missile bases will slowly become anachronisms like Norman castles and eventually be preserved as historic sites.

Other things have deteriorated since the ending of the Cold War. Real "small" wars, in which tens of thousands do die, have replaced the threat of world war in which tens of millions might have died. Yet local wars do not provoke a general concern, as did the perceived nuclear threat. Nuclear weapons are now (for example) only the most obvious and absurd component of a weapons business that for the U.K. and U.S. (I think unlike Canada) involves massive sales of "conventional" arms to corrupt regimes of several kinds, corroding domestic political dialogue for the sake of money. The scandal of ministerial links with illegal weapons sales was the cause of the Scott Inquiry in the U.K., whose outcome seriously damaged government credibility without stimulating perceptible political changes.

Those who seek to confront the dangers of technology have in many cases chosen other issues on which to take a stand, notably issues of environment versus industry. At "Hiroshima Week" in London last year, James Heartfield cogently dissected the changes that have occurred in Britain over the last quarter century. New social movements have replaced mass movements. Participants, despite bourgeois backgrounds, now show hostility to the "law," advocate an individualist morality, and are preoccupied with self-definition. These movements are typically elitist, and elites turn their backs upon society. There has been a decline of both trade unions and mass parties. The political strategy of the new groups is the challenge: "drop the bomb on me if you dare."

"Badger," an activist who looks to Heartfield disturbingly like the classical image of Christ, lives in trees - part of the wave of "green" protectionism against the axes wielded on behalf of new British motorways. The older Left has been coopted on both sides of the Atlantic. In the U.S., Amitai Etzioni is writing speeches for Bill Clinton. The new language of "rights" is also a language of constraints. Rights for women and children mean intrusive social workers looking for evidence of abuse. Rights for animals mean restricting medical research. Welfare has become
coercive. The advance of science and middle class enlightenment have created virtual prisons for those unable to control their lives.

Recent illustrations of the misuse of "science" are provided by the British beef ban controversy and the U.K. highway construction projects. Both are topics in which "science" was appealed to in a self-serving way by government and industry. They are the kind of matters on which organizations like Science for Peace should take a stand. These issues exemplify ways in which politics and science intersect. Social concern has left the nuclear weapons question on the sidelines. These cases exemplify the lack of official thought about long-term consequences for the well-being of individuals. We need to show this connection if we are to maintain our belief in the possible coexistence of science and a decent concern for humanity; and having shown it, we need to work towards public action of a new kind. The former will not be easy, the latter probably impossible. But we have to try. Most of us are comfortable members of bourgeois society. We cannot afford to let the "Badgers" of this world make all the protests on our behalf.

Peter Nicholls is the new President of Science for Peace. He is also Vice-President of the Canadian Biophysical Society. His research is on the function and control of cytochrome oxidase, the enzyme responsible for oxygen uptake by the cell. 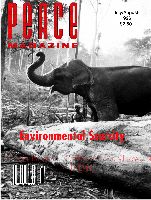