The Dangers of the 1990s
This article explores a particular form of "common security": the voluntary transformation of several regions in Europe into a community ofstates-a Regional SecurityAssociation (RSA)-sharing a structurally non-threatening security policy with dramatically reduced military forces. This transformation would yield the type of enduring stabmty and security that has been so difficult to achieve in Europe over the last several centuries. Most important, it would provide structural stability that could mitigate or even avert the tensions that are certain to develop in Europe as the Cold War order of The 1980s collapses into new and potentially dangerous patterns in the 1990s. This Regional Security Association approach could also be applied elsewhere in Europe (in the Balkans and the Baltic) as well as in other regions of the world where similar tensions threaten to undermine international and regional security.

Profound changes continue to rock Europe, with breath-taking yet unsettling results. New structures (and not merely verbal declarations) have to be developed to establish long-term political stability and security.; previous efforts simply have not been successful. The result in this century alone has been two world wars.

The current Conference on Security and Cooperation (CSCE) process and the significant conventional force reductions being pursued in the Conventional Armed Forces in Europe (CFE), the Confidence and Security Building Measures (CSBM) and the Economic Common Market (EC), are all working on the reduction of tension. It is hoped that through a closer economic and political relationship, stability and peace can be achieved.

The current euphoria surrounding events in Europe could, however, easily shift to muted concern or outright apprehension if Germany atone or with other Western nations-were to enlarge its military forces. Confronted with internal ethnic and religious tensions and fundamental economic problems, no political or military leader in the Soviet Union could ignore such a threat. The expected result from their side would be a stiffening in the arms reduction negotiation and further strengthening of their military capabilities instead of disarming. Obviously, the reaction by the West would then be the same and we would return to an even more dangerous escalation of the arms race and its corollary danger of conflict and war.

A demilitarized Germany would be no solution because it would produce a military vacuum. On the other hand, neither NATO nor Warsaw Pact forces still stationed in Germany would be tolerable in the long run to one or the other power. New solutions have to be found that can improve security and peace for all parties involved.

An alternative deserves considerafion: the voluntary transformation of the Central and East European region into a community of states sharing a structurally non-threatening military posture and doctrine with sharply reduced military forces. This approach would entail the creation of three distinct Regional Security Associations (RSAs) embracing the critical areas of potential instability and insecurity within Europe. A Central Security Community would be open to all 35 nations belonging now to the CSCE. The nations initiating such association would have to be Germany, Poland, and Czechoslovakia. A Baltic Security Community would comprise Estonia, latvia, Lithuania, and could include Finland. A Southern or Balkan Security Community would comprise Bulgaria, Greece, Rumania, Turkey, Yugoslavia and perhaps Albania.

These groups of nations wouldjointly implement collective security policies within their regions based on the concept of "transparent enhanced defensiveness." Policies would be deliberately non-threatening, with a heavy concentration on anti-aircraft defence and anti-tank weapons and would rely on dramatically reduced force levels with an increased emphasis on militia and reserves.

They would also include an extensive array of confidence- and security-building measures to promote military transparency. The purpose of such regional associations would be to work towards military, political, and eventually, economic stability within their regions. Each Regional Security Community's combined military force would need to be strong enough to provide a credible and effective defence of the region against outside aggression (with conventional weapons) and at the same time ensure peace among the nations within the regional association. But they must never have forces that could be used for aggressive and expansionist purposes. In short, each Regional Security Association would be set up to unify rather than divide.

Even where there are differences in ideology and p0litical systems, nations would find it in their own self-interest to join with their regional neighbors to work towards a common goal: the simultaneous improvement of their economies. In addition, such associations of nations should subscribe to a policy of human rights in their region. Resources freed from defence expenditures would fuel the modernization of regional economies. At the same time these regional security communities would help reduce international tension and conilicts, thereby minimizing the possibility of external intervention.

The argument may be made that comprehensive regional security entities such as RSAs cannot be achieved because their operations would interfere with the sovereignty of the participating nations. However, the curtailment of sovereignty has become common since the Second World War. This is certainly the case today, not only in the economic sector, but even more extensively in the military sector, which was previously the area most strongly opposed to any abrogation of national sovereignty.

The primary product of an RSA Treaty would be aregionally-oriented but essentially autonomous multilateral security force that would largely or completely replace national military forces within the region. It would perform the functions of a defence force, border guard, and verification agency and also could incorporate other paramilitary functions such as environmental and resource monitoring as well as search and rescue. The emphasis and structure of the RSA's security force would differ with the individual region and its unique concerns and character. Two principles would, however, apply to each RSA: it must neither create, nor be perceived to create, a military vacuum within the region; nor must it be seen to have an aggressive posture that could threaten others.

Such a regional defence force must not and cannot follow the model of NATO, the Warsaw Treaty Organization or similar defence arrangements. NATO and the WTO had been designed not only to defend, but also to retaliate and, if it is deemed necessary, to make a preemptive attack. The line between defence and offence is very thin and is made no more easy to distinguish by modem conventional weapons. By contrast, as indicated above, an RSA's security efforts would only be directed at developing non-threatening defence capabilities. A well-prepared defensive system, concentrating its efforts on modem anti-ship, anti-tank and anti-aircraft weapons and a well-disciplined and trained military force supported by a militia, would fulfill these needs. In addition, the nations directly involved would alone be responsible for the implementation of agreements reached. NATO as well as the Soviet Union would have to guarantee the borders of the regional association. Thus, any outside aggressor would be deterred from attacking any party of this RSA.

The characteristics of this defence-police-verification force can be summarized in the following way: The force could be compared to the functioning of a national police force in the sense that its operations would have to remain within the legal framework established by the individual RSA constitution. It would be expected to act automatically, in accordance with criteria established in the constitution of the regional grouping, and would not have to wait for a special mandate or collective political deliberation to perform its tasks. As far as the size, armament, and activities of the force is concemed, it would have to be well-defined in the founding Treaty. The personnel would be recruited from the forces of all participating nations, freely intermixing personnel. They would wear a distinctive uniform, temporarily surrender their national status, and would swear allegiance to the RSA defensive-police-verification force. The personnel would be located at strategically positioned bases, close to sensitive border regions, airports, and other transportation centres.

The participating nations of the regional association would have to agree that all proscribed heavy military equipment be destroyed in an agreed manner, including (should there be any) chemical and nuclear weapons and their delivery vehicles. In addition, the movement of these types of equipment through any of the participant countries by non-regional powers would almost certainly have to be forbidden.

A review board and an ombudsperson with specific legal power would have to be established to ensure the perception as well as the fact of fairness in the force's operation. In addition, it is important to emphasize that changes in an RSA's founding constitution could only be made with the participants' unanimous consent. Thus, nations would not have to be afraid of harmful changes in the constitution being made without their consent. Nations wishing to leave the association would need to provide at least one year notice of intent.

The formation of Regional Security Associations, as proposed here, could help to reduce the risk that conflicts between small and medium size nations could escalate and eventually involve the nuclear powers. They would serve the self-interest of all nations, both those directly involved and those outside of such regional associations. Moreover, the formation of RSAs in other regions, such as the Middle East, Central America, Balkan states, South-East Asia should also be considered. Their adoption could be the first step leading towards the reduction of intemational tensions and the danger of open confrontation. Thus, the development of RSA-style security communities could become a very important step in the transition to a world without war. Because contemporary political conditions are more than usually fluld, now is a particularly good time to take steps toward the development of RSAs. As time passes, the difficulties facing their implementation will grow.

Arnold Simoni is a retired business man, author of two books entitled Crisis and Opportunity and Beyond Repair, and a co-founder of the Canadian Peace Research Institute. 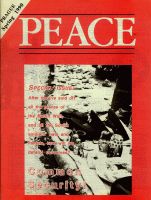 Search for other articles by Arnold Simoni here