Loved the piece about St. Barbe Baker! In the early '30s, he stopped by our house in Dublin, N.H., to see my dad, a forester, and wanted to see what he was up to. It was a Sunday, and he took him over to a woods that needed tbinning. Dad had no money to hire someone to do it, but he'd found a fellow in a nearby town who had no money to buy firewood. So Dad marked the trees to cut and, on this day the fellow was out there, snow all over the ground. His ten-year-old son was helping him haul and stack the wood by his truck; his wife was warming soup etc., over a little fire, with the baby in a basket nearby all of them thoroughly enjoying a day's outing. St. Barbe was absolutely fascinated. He went on to Washington, D.C., and later wrote Dad that he'd told Roosevelt about it and ultimately the Civilian Conservation Corps was the direct result!

Our Nonviolence Resource Centre is now functioning (General Delivery, Argenta, B.C., VOG iBO) to address conflicts over environmental and peace issues. We can mail videos and literature throughout Canada. Please tell us about situations where our resources are needed, and tell people who need our resources about us. We also want help in identifying videos and literature produced by organizations in your area. We are looking especially for videos on nonviolent environmental campaigns, on women's issues, and on individual responses to conflict. Phone me at 604/366-4307.

In East Berlin recently I asked members of the New Forum how they had begun the nonviolent mass demonstrations that eventually brought down their government. "We got fed-up," Uschka Thierfelder explained, "when Honecker went to show off to Ceaucescu in Romania after the clearly falsified election last May in our country. Also, Gorbachev halped make us lose fear of attempting the change. We started as small groups, church groups, or just those who wanted to stop the goyernment's corruption." From many small beginnings, they then started to reach out to others. The result was large and significant.

The primary poster of the New Forum shows a small, circular table with six chairs around it, as it would be after a small meeting. All that is written on the poster is "Forum." As a North American, used to fancy, colorful and loud messages, I found it a bit drab. But the beautiful simplicity of its message became clear in terms of my earlier discussions with the New Forum members: that big things start here, in forums simple and small.

This can be an example for all of us involved in small, grassroots organizing for peace.

The U.S. is building a facility on Back Island in Alaska, 90 km from the Canadal U.S. border, to measure the acoustic signature of the Trident ballistic-missile submarine and the Seawolf nuclear attack submarine and predict their vulnerability to detection. It is scheduled to be operational by 1991.

The most likely route for submarine access to this testing facility is through Dixon Entrance, south of a line 54 degrees, 40 minutes north, which is Canadian water. Like the Trident, the Seawolf (which is coming on line in 1990) will be nuclear-powered and will double the current nuclear weapons capacity of the Los Angeles-class attack submarine. The health and security of thousands of Canadians living in this region, the rich natural environment of the area, and the sovereignty of Canadian waters are all at risk if this facility is completed. The project contributes to the proliferation and modernization of nuclear arms. 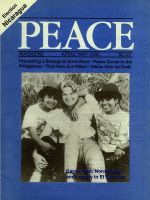