A Czech View of the Western Peace Movement

Vaclav Havel, The Anatomy of Reticence: Eastern European Dissidents and the Peace Movement in the West. The Charta 77 Foundation, Box 5-10405, Stockholm, Sweden, 1985

In this essay Charta 77 spokesman Vaclav Havel presents a concise analysis of East European dissident views of the western peace movement and of peace theorizing and action in East-Central Europe. Havel writes directly from the experience of a Czechoslovak dramatist, essayist and human rights activist of many years. He was released from prison in l983 after spending 4 years behind bars for his activism.

Havel says the word "peace" has been drained of all content in the Soviet bloc. For 37 years in Czechoslovakia slogans such as "Soviet Union, the Guarantor of World Peace" and the mandatory peace parades with mandatory placards have created an alienation among the ordinary people toward any pronouncements from East or West about peace. Unlike the claims of the official peace committees many of us are aware of, such as the Soviet Peace Committee, Havel claims that "dissidents" are really saying nothing other than what the vast majority of their fellow citizens say privately.

Havel says the ordinary Czech has an almost complete sense of hopelessness of having any impact on global affairs (not to mention domestic affairs.) Even dissidents look at opportunities for commenting on foreign or military affairs with reticence because of the fear of repercussions (loss of job, imprisonment) and because of the fear of looking ridiculous in the eyes of fellow citizens, fellow dissidents and themselves. The latter is a point Havel elaborates. It involves attitudes toward power in society and offers, I think, some parallels with Western public attitudes. Agreeing with a Western peace movement platform (e.g. one for a nuclear free Europe, with commentary on Soviet weapons) is considered utopian and removes the dissident from the ordinary realm of domestic human rights criticism. It is considered almost too serious and beyond the realism of the present oppressive domestic conditions.

Nevertheless Havel does not preclude the possibility of dissident sympathy for essential peace movement goals. He describes five common elements of independent East-Central European thinking about peace. He criticizes Western peace groups for two major failures: failure to realize and incorporate into their activities the inseparability of peace and human rights and failure to oppose loudly (if at all) the only war in which a European state is currently engaged.

Havel's examination of the East European dissident and public views of power, peace and human rights (and of dissident activity itself) are must reading for anyone concerned with peace activism--East, West, North or South.

Also see another essay by Havel on the same topic in the Nov. 21, 1985 issue of The New York Review of Books. 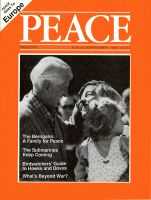 Search for other articles by Peter Wade here