Are the U.S. and the USSR Mirror Images of Each Other?

THE HUMAN MIND CAN UNDERSTAND unknown phenomena only in terms derived from the study of known cases. Canadians are very familiar with one of the "superpowers," the United States. They know very little about the other, the USSR. We know that there is a struggle between "hawks" and "doves" in the U.S.A., so we take it for granted that a similar struggle goes on in the USSR. We know something about the workings of the "military industrial complex" in the U.S.A. We assume that it works the same way in the USSR.

Supply and Demand, East and West

I have had the rare good fortune to live in both countries--twenty years in the U.S.A. and seven in the USSR--not as a diplomat or foreign correspondent, but as a worker in my profession, fully sharing the life of my fellows. The basic insight gained from that experience is that life in the two countries is much more similar than either side supposes. But there is a fundamental difference in the socio-economic structures which creates opposite problems. In the West, demand cannot keep up with supply, and in the East, supply cannot keep up with demand.

In the West owners or managers do not have to worry about getting the inputs they need, but they fear that "the bottom may drop out of the market," that they can no longer find buyers for their goods or services. Workers have no trouble finding anything their money can buy, but they are never sure that they will be able to sell their skills; finding or holding a job is always a problem. In the East, workers have to stand in line to buy the goods they want, but there are always plenty of jobs waiting for them. The all-important search for sales creates in the U.S.A. three quite rational motivations--not for war, but for armaments.

First, arms expenditures do keep the economy going. If an arms factory closes, the corporation loses profits, the workers lose their jobs, and the community loses its economic base. Corporations usually have diversified their investments and can absorb the loss, but workers rarely can find other jobs, nor can communities find other enterprises. Naturally, members of Congress are intensely pressured to get arms contracts for their districts.

Second, as the supply of capital outruns domestic demand, investments go abroad. Returns have to be shared with the workers and the governments of the countries where the investment opportunities are--mostly in the "Third World." Hence arises a potential conflict of interest which becomes actual if the foreign government has "unreasonable" notions of "national independence." In the good old days there were two effective means to bring them back to reason: economic pressure or "sending in the marines." The first still works sometimes--e.g. Chile. But it did not work in Cuba because the USSR bailed out the Cuban economy. The second method also may work.--e.g. Grenada--but it did not work in Vietnam because the USSR supplied the Vietnamese with modern arms.

So, while there is no direct economic conflict between the U.S.A. and the USSR, the latter's support of Third World countries makes it more difficult for the U.S.A. to deal with them.

Third, because of this it is rational for the U.S.A. to attempt to weaken the economy of the USSR by forcing it to divert resources from economic development to the arms race. As the economy of the USSR may be only half the size of that of the U.S.A. it is estimated that the arms race absorbs over 12 percent of its Gross National Product, as contrasted to 7 percent in the U.S.A.. Moreover, while for the USSR these 12 percent are a total loss, in the U.S.A. the 7 percent of human and natural resources now absorbed by the arms race are as likely to become idle as to be employed in the civilian economy.

None of these three reasons for promotion of the arms race makes sense for the USSR. Every worker, from the cleaning woman to the top scientist, who loses a job in the arms industry, knows that ten other jobs are available. The Soviet economy has no need to invest abroad because every ruble that can be saved is in demand for domestic investment; and for them to try forcing the U.S.A. to spend more for armaments is more likely to stimulate than to retard the American economy.

What the U.N. Votes Mean

It is therefore not an accident that the record of the United Nations shows so many "yes" votes for the USSR and so many "no" votes for the U.S.A. on disarmament proposals advanced by neutral and nonaligned nations. The USSR's votes are prompted by a dual self-interest: Reduce the burden on the economy and reduce the risk of nuclear war. These also happen to be the vital interests of all nations, including Canada. Indeed, they are basic interests of the American people as well, but for them they are obscured by the three short-sighted but powerful motivations mentioned above.

It is vital for the Canadian peace movement to see the world as it really is. The "two superpowers" are not mirror images of one another. If we work on that assumption we are following a wrong road map and cannot arrive at our goal of universal disarmament. 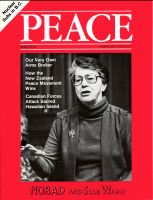 Search for other articles by Hans Blumenfeld here