Watkins Film Wraps Up Shoot at NFB Studios In Montréal

TORONTO--An important international disarmament initiative is concluding in Canada this year. The final production sequences of A Film for Peace, made with the participation of many people from all parts of the globe, will be made in Montréal with final editing at the National Film Board Studio.

The film has been anticipated as much for the reputation of the maker, Peter Watkins, as for its content. Watkins, a British-born director whose previous work includes the once-banned-on BBC film The War Game, Culloden and Edvard Munch, is trying to implement some of his criticisms of the mainstream media in the production, and has focussed on the reactions and thoughts of families and grass roots groups in such diverse places as Japan, Tahiti, France, the USSR, the US and Scotland.

Watkins hopes the process of making the film will equal or surpass the film's importance. Watkins has long felt that the mainstream media and Hollywood have polarized issues, distanced their audience from issues such as the arms race, and that they have encouraged inaction. By presenting people's views on the arms race, he hopes that others will be inspired and that the network which has been established to support the making of the film will help people to act locally.

Because of Watkin's position outside of the regular media, the production of A Film for Peace has not been as well-sponsored as major Hollywood motion pictures. Diverse fund-raising efforts are underway in many parts of the globe.

In Canada, these efforts are being co-ordinated by the SkyWorks Charitable Foundation. A fund-raising brunch is planned for April posters of a photo-montage by Richard Slye are for sale, and direct appeals for money are being made as well. Sky Works hopes to raise $40,000 with the $10,000 already donated.

Contributions to the film are not merely financial: the eight animation sequences being produced in Montréal require many varieties of image-producing people.

A major contribution has already been made by the National Film Board's Studio A, which is giving the film facilities for film processing, sound mixing and other editing. According to one film supporter, this contribution (worth many thousands of dollars) is "the most substantial contribution" from any public agency so far.

The film is scheduled for completion by the 40th anniversary of the bombings of Hiroshima and Nagasaki (August 6-9, 1985).

Contributions of either time or money can be directed to the SkyWorks Charitable Foundation at 566 Palmerston Ave., in Toronto, or P.O. Box 1195, Station la Cite in Montréal. 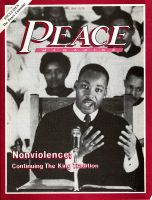 Search for other articles by Hamish Wilson here