What's This Doing Where My Peace Calendar Used To Be?

Welcome to the new and improved version of The Peace Calendar. Since our last issue, we at CANDIS changed the title and format of our publication. The transformation was the result of several months of researching the alternatives, examining the strengths and weaknesses of The Peace Calendar, and (of course) the requisite bickering over petty details.

There are many reasons for the change, but the most decisive factor was the problem of distributing The Peace Calendar. For a national publication, The Peace Calendar was remarkably hard to find in most communities outside the Toronto Area.

If the publication is going to reach more readers, it must be commercially available. It should be on magazine racks everywhere! Yet, for a variety of reasons, bookstores, newsstands and grocery stores are more likely to display magazines than tabloid newspapers. The obvious solution was to go to magazine format.

In fact, once we started thinking about it, we found a number of good reasons for such a switch, some of which are apparent in the magazine you are now holding.

Magazines are more informal, both editorially and visually. A well-designed magazine version of The Peace Calendar will be more likely to attract new readers, hopefully providing more people with an understanding of the arms race and of the peace movement.

Going to magazine format also gave us an excellent opportunity to change the title of the publication. "The Peace Calendar" is a nice name, but it had its faults. For example, we were hearing from people who said they had finally picked up their first copy only to discover that it wasn't just a calendar after all. We decided that "The Peace Calendar" was a great name for the event listings pages, but that we really wanted a new title for the publication as a whole.

Several of our favourite titles were already being used by other publications and groups (Peace By Peace, Sanity and Peace Now, for example). Many other appealing titles did not accurately reflect the focus of the magazine. So we kept thinking. But once our creative juices started to flow, they just wouldn't stop. Some of the sillier names we came up with were Venus de Milo (think about it for a minute); Harold (Of The Apocalypse); 11:59; Bombs Away; Reductase ("any enzyme which accelerates the process of reduction"); and Pacifist of Fortune. The more serious contenders included CounterForce; Disarmament Canada (a parody of government ministries, but not all that funny); Options; and Countdown.

Finally, we decided that simplicity was best. We went with Peace Magazine, a name all of us were comfortable with.

So this is the first issue. We've put a lot of thought into it, but we're still thinking. Magazines are fairly flexible, so we may adjust things here and there as the months go by.

As usual, however, we're straining against our limitations - both financially and organizationally. The magazine format is more work, not less. We're still underfunded and understaffed. Peace Magazine is produced almost entirely by volunteers, and there is always room for more experienced assistance.

If you like being both frustrated and gratified; if you like doing challenging work as well as joe-jobs, and if you like seeing your name in black and white, you'll be in good company here.

If, on the other hand, none of these things appeal to you, feel free to send us all your money!

Of course, you could just sit back and read. Magazines take up less space on the breakfast table...

As we go to press, two developments have taken place which should be mentioned. Last week, Defence Minister Coates resigned his Cabinet post. The timing of his resignation was, from a production manager's perspective, rather annoying. When the news broke, several of our articles dealing with Coates had already been typeset and pasted up.

We did change his title to "Former Defence Minister," but we decided not to change what was actually said in the articles, for a several reasons. In a recent report in the Globe and Mail, Prime Minister Mulroney said that Coates may return to a Cabinet post when he's had a chance to clear his name.

If Coates does not return as Defence Minister, the peace movement will certainly be watching closely to see who is appointed as Coates' successor, and the analysis of government policy in this issue of Peace Magazine will likely be relevant for those following these developments.

The other late-breaking story was yesterday's announcement that the first free-flight test of the cruise missile will take place tomorrow, after we go to press. As you can imagine, this issue of Peace Magazine does not contain anything about the protests expected tomorrow. However, rest assured. We already have lined up a package of articles exploring the impact of the cruise tests on the Canadian peace movement, as well as the strategic and technological implications of the cruise itself. We will be running this package in the next issue of Peace Magazine.

Now that we're a magazine, we're going to press a week earlier than we used to when we were a newspaper.

The only main effect that our earlier press deadline should have on our news coverage is that you - the people who suggest items that need to be covered in Peace Magazine should give us lots of warning. Keep in touch. 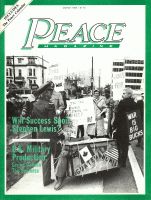 Search for other articles by Jon Spencer here